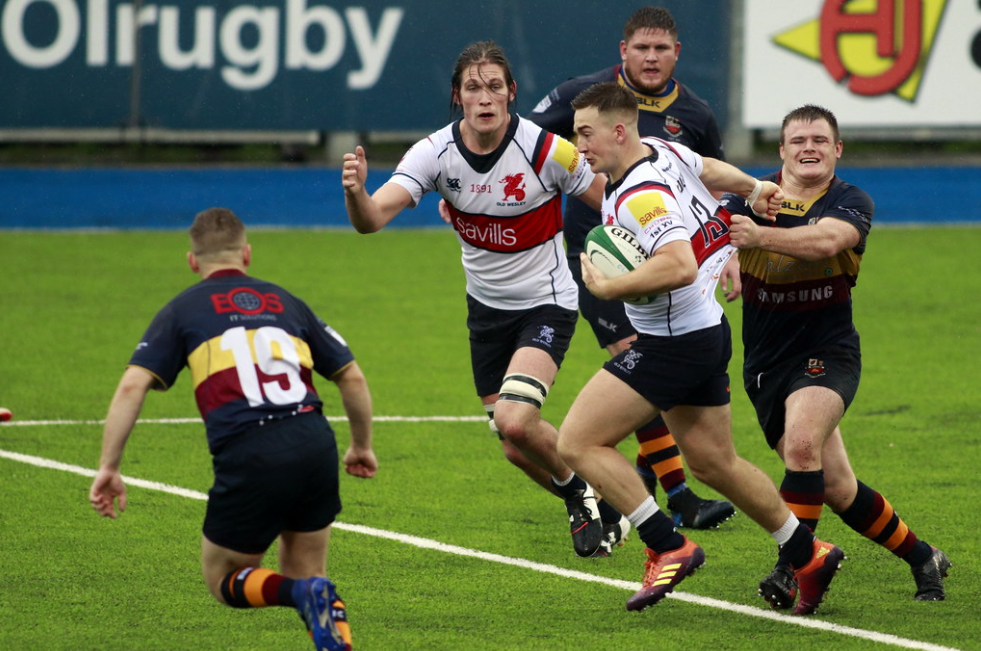 Old Wesley had a winning start to their Energia All Ireland League campaign last Saturday with a hard earned home victory over Banbridge on a 13-3 scoreline.  The prevailing weather conditions militated against flowing rugby as the greasy ball led to many handling errors on both sides.

Wesley started well and put early pressure on the Banbridge defence as they went through the phases but, inevitably, some of these broke down due to handling errors. In a match like this, with a plethora of scrums, it was heartening to see the excellent performance of the Wesley pack in terms of securing primary possession from scrums and line-outs and the young front row of Harry Noonan, Ben Burns and Stephen McGivern performed admirably.

With scoring opportunities scarce, it was important that Wesley capitalised whenever the chances came. On 22 minutes, after some typically rampaging runs from Paul Derham and JJ O’Dea, a kickable penalty was finally conceded by the Banbridge defence, which full back, Rory Stynes, duly slotted – Old Wesley 3-0 ahead. The lead was short-lived, however, as Banbridge full back, Adam Doherty, knocked over an equalising penalty after a Wesley infringement on 30 minutes. Wesley stormed back to attempt to regain the lead before half time, but were thwarted after they eschewed a kickable penalty to go to the corner but were also penalised for offside when a chip through looked promising – Half time score 3-3.

Wesley started brightly in the second half and, on 45 minutes, Stynes pushed a penalty narrowly wide. Banbridge fought back and, on 49 minutes, it took an excellent tackle by Charlie O’Regan to prevent a try in the corner. Wesley’s dominance and control up front continued to sap the energy of the brave Banbridge defence in the trying conditions and, on 57 minutes, this pressure led to another penalty, which Stynes converted this time to give the home team a vital lead.

A worrying development on 60 minutes saw replacement, Tim Clifford, receive a harsh yellow card. The Wesley team, to a man, lifted their game heroically to see out this tricky 10 minute period and a vital scrum penalty and a great tackle by Burns were particular highlights.

Wesley had a number of chances to put the game to bed but an uncharacteristically sloppy scrum saw the opportunity go a begging. On 76 minutes, they finally made the game safe, when, after apparently missing out on a try scoring opportunity, they regrouped on half way and Conor Barry ( who put in a wholehearted 80 minutes shift) gathered to accelerate impressively up the touch line to ground half way out, for Stynes to add the points – Old Wesley lead 13-3.

In the remaining few minutes, the only option open to Banbridge was a losing bonus point, but Doherty missed a very kickable penalty with the last kick of the game. Full time score – Old Wesley 13  Banbridge 3.

This was an encouraging start, with a long road ahead and 2 vital derby matches to come over the next 2 weeks (Naas away on Saturday 12th and St Mary’s at home on Saturday 19th) and, hopefully, the team gets strong support from club members for these matches.