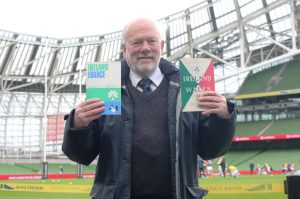 When Dave Bennett attended the Ireland v Scotland game last Saturday it was his 200th consecutive time to attend a home international at Lansdowne Road, together with the matches played at Croke Park when the stadium was being rebuilt.  The first match he attended was Ireland v France in 1971 which was a 9 all draw. Dave has also attended many away Ireland matches and a large number of Leinster matches.

Dave, a long-time member of the club, is the son of the late Stan Bennett a former Vice President and Hon Treasurer, and a nephew of the late Arthur Bennett, Past President. He started attending internationals as a young boy with his father, and for the last twenty years or so he has been on the Old Wesley team of Honorary IRFU stewards. He has a collection of every programme from all of these matches.

The IRFU have acknowledged this fine achievement and Dave and his wife Gemma will be attending the Ireland v Italy match as their guests.

We wish Dave many more years of attending matches whether as a steward or as a spectator. 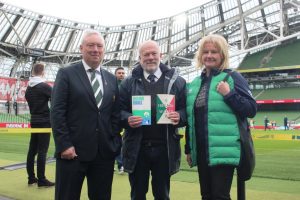 Photo above shows David with his wife Gemma and IRFU President Nicky Comyn.