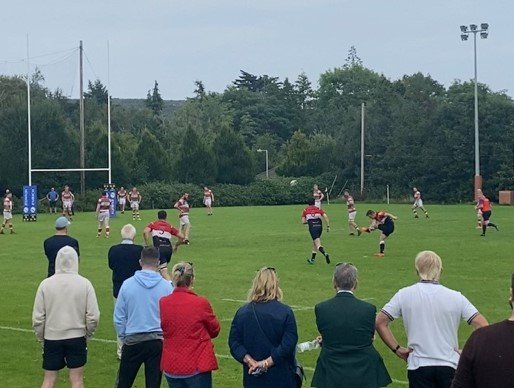 Cracking game against Bective and Tim Hawe wins it with last kick of the game. The Old Wesley Team had 3 families represented by 2 brothers – Hawe, McDonald and Boyd.

A glorious sunny day in Ballycorus was the back drop for the 3rds first run out in 18 months. The 3pm kick off suited most players, however the location didn’t suit Beefcake Tim Hawe as he had arrangements to be in a pub for 5pm that evening.

Bective started the better of the two teams and put pressure on the Wesley try line early on aided by Old Wesley’s poor discipline that allowed them to work their way up the pitch. Wesley clung on though and limited Bective to just a penalty. Wesley’s first adventure into the opposition’s half resulted in a penalty converted by Tim Hawe.  Again, poor discipline allowed Bective to march up the pitch and kick another 3 points.

Wesley’s fortunes changed after this as they limited the penalty count and started to play some ball. Messrs Paddy Davies and Richie Jermyn contributed with some strong bursts through the middle. That pressure was converted into another 3 points leaving the scores at 6-6. Old Wesley were now playing much better and were rewarded with a try after a tasty chip through from Tim Hawe was fly hacked on further for Braithers to gather and flop gracefully over the line, equalling his try scoring tally from 2019. A conversion followed, 13-6 Wesley at half time.

The second half was a less appealing affair as fatigue came over the men. Bective capitalized on some pressure and kicked a penalty and continued to pile on the pressure aided by a familiar missed kick to touch from Jamie Boyd that allowed them to work up the pitch and score a nice try in the corner. A missed conversion left the score at 14-13 in Bective’s favour. The Old Wesley scrum struggled in the second half as well and when asked if Bective were doing anything illegal to gain an advantage, Jeff Dand simply replied “Na we’re just ******”.  Honesty from the big man.

Importantly, every time Wesley did get into the opposition’s half we were able to win a penalty.  Bective matched these penalties leaving the scores tied going into the last minutes.

The jig did seem to up for the weary Old Wesley men as Bective won a scrum penalty in the last minute on our own 10m line. Luckily the penalty went wide and was caught by Conor Boyd. At this point Conor channelled his inner Bilbo Baggins and screamed “I’m going on an adventure” as he went off on a solo run despite there being a 4 on 1 overlap. Wesley did retain possession though and worked their way up the pitch through good carries from Dan Hall and the McDonald brothers. Eventually we won a penalty for something; no idea what it was for, but Old Wesley happily accepted and waited for Beefcake Hawe to step up.

Keen to avoid extra time, which would have delayed his arrival for pints later that evening, Tim Have stepped up and calmly slotted a penalty kick from 40m. He would go on to say the kick was from 60 metres later that evening.  Relieved celebrations followed as Wesley lived to fight another day. Special mention to both Gary Hawe and Sam Smyth who both put in excellent shifts on their debuts, and Cal Lynn for playing after a late call up.