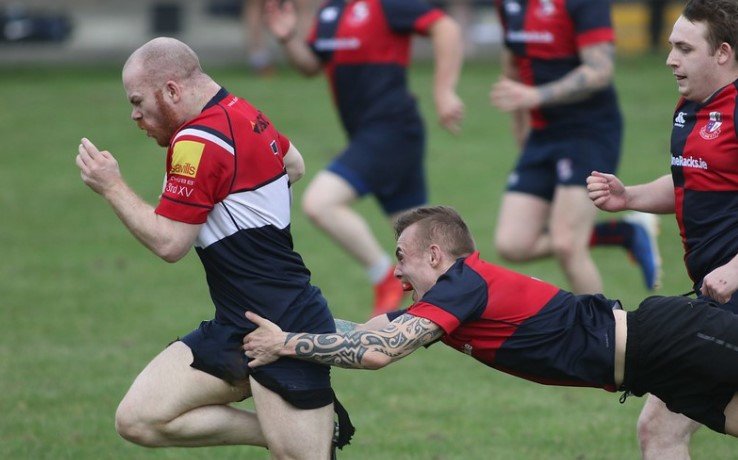 Wesley arrived to Coolmine meaning business, aware that any loss of focus would result in their O’Connell Cup defence being derailed. Upon scaling the Ashtown steps, the Wesley outfit were delighted to see a pristine playing surface, with players and alickadoos alike noting that it would suit their expansive ‘jouez jouez’ style of rugby football. Despite missing some key personnel, Wesley were bolstered by the addition of debutants Jean Kyllian, Andrew Vincent and Stephen Keane to the matchday squad. And not to be outdone by the returning CR7 in Manchester, the men in red welcomed Mulcaire O’Mara back to the side after several years across the pond.

Approaching kick-off, the red-hot atmosphere in the ground could only be matched by the warmth radiating from Dan Hall’s spine, after it devoured nearly a litre of DeepHeat. Several unsuspecting spectators mistakenly thought they had witnessed Aurora Borealis after Eric Parfrey’s calves underwent similar treatment.

The game kicked off and it wasn’t long before Wesley crossed the whitewash. Dominant early carries from Wesley’s double Big Mac’s, McDonnell and McDonald, gave them the foothold they needed to earn the right to go wide, and Wesley’s outside backs duly accepted. Captain Jamie Boyd grabbed the bull by the horns and shook off 2 would-be tacklers on his way to the try-line. Hawe converted, leaving Wesley 7-0 up inside the opening 3 minutes. Further tries followed from Hall, Boyd Senior, Hawe Senior and speedster David Braithwaite, leaving Wesley 29-0 to the good. Wesley’s resident physiotherapist/scrum-half Arran Copeland replaced the classy Cal Lynn on the 30 minute mark, and immediately helped the rampaging Hall to another meat pie. Half time score: Wesley – 34, Coolmine – 0.

Wesley trotted across the pitch for a half-time review with Coach Monty. Most of the focus was on his footwear selection, but by the end of his pep talk, the Wesley men were ready to pick up where they left off.

The second half followed a similar trend to the first, with Copeland bagging a double after some excellent interplay between forwards and backs. The fleet-footed Michael Kearney displayed impressive skills throughout, surely jeopardising his lifelong membership of the front-row union? Braithwaite, Jamie Boyd and Conor Boyd all bagged a brace in a ruthless closing period. Not be outdone by his elder brother, Gary Hawe crossed the try line and showed the Wesley management staff what it looks like for a Hawe to get out of 3rd gear. O’Mara was an ever-willing ball carrier during the closing salvo, showing the American Eagles what they are missing out on. The game finished with Vinno crossing the whitewash for his first Wesley thirds try; here’s hoping it’s the first of many! A special mention must also go to young George McConnell, for his tireless work rate hand delivering the kicking tee on 11 occasions! Wesley advance to the final, where they will meet Lansdowne in early October.