Fortress Donnybrook cuts an imposing setting for most teams and it was no different for an overmatched Terenure side as they went down 30-20 to the Wesley Wyverns.

The squad and coaching staff arrived in buoyant mood following a long day of flat whites in the sun. The tension was palpable and it showed as El Kinnero proceeded to inflate the match balls to the extent it was like kicking a cinder block around the field.  Nonetheless, a sharp warm up and final words of advice from Coach Hastings instilled the lads with the confidence that a good performance was on the cards.

Wesley were out of the blocks fast with Jeff Dand, Sam Moore and Gav ‘Big Red’ Telford establishing dominance at scrum time. It wasn’t long before some quick hands from Jamie Boyd would see Aaron McDonnell scythe through the ‘Nure defence to open the scoring. A Tim Hawe conversion and subsequent penalty created a healthy Wesley lead. The hard running of Jack Byrne, Thomas Emo and Mike Triggs had an ever youthful Jamie McConnell patrolling the dead ball line with the verve of a man who knows there’s still 80 minutes in the tank, if needed. Strong running lines and some neat backline play from David Priestman would see David Braithwaite (starting a new job today, well done Braithers) scoring in the corner (C- for the dive).

The Terenure hooker was under terrible pressure throughout the 1st half and the Wesley lineout was operating at a very high level with Eric Parfrey feeding his addiction…padding his personal statistics. A Terenure try just before the half focused Wesley minds and they emerged for the second half with renewed purpose.

The introduction of Dan Hall and Colin McDonald yielded immediate results and the impact was evident. Some good phase play from the pack and hard running from the backs saw Wesley work their way down to the Terenure 22, where sustained pressure at scrum time from Goldie and Mick Kearney yielded a try for resident veggie number 8 Ivan Campbell. A creatine induced cramp forced Aaron McDonnell off the field with the versatile Jack Byrne being moved to wing. Scott McDonnell (being fast-tracked by the club to alickadoo status) returned to the row with Parf to 6.

The on field rivalry between Phil O’Leary and Braithers under a high ball was fast reaching mythical status. As the Terenure 10 sent a kick their way, surely one of them would communicate that it was their ball and that the other should leave it….Surely a confusing aerial collision of biblical proportions similar to that of the first half couldn’t happen again…Right?! Wrong.  The loss of Mike Triggs to an ankle injury saw the introduction of Luke Correll who hammered away at the Terenure defence with the same vigour with which he trolls the Munster rugby twitter account.

As the game progressed Wesley pushed further ahead on the scoreboard. The Warby inspired Spike and Whiskey were proving effective weapons inside the Terenure 22 and following some sustained pressure, with good carries from Parf and Dan Hall, Colin McDonald touched down from short range.

Terenure were certainly worthy finalists and fought until the end with an 80th minute try to narrow the Wesley margin of victory. However, in the end, Wesley were too good on the day and were deserved winners of the Albert O’Connell cup for 2018/2019.

This was the fifth time Old Wesley has won this competition, which we first won 41 years ago. See photos below of this years team and also the team that won the trophy in 1978. 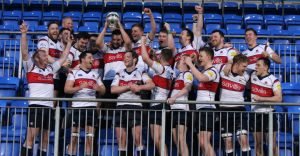 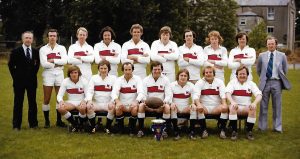