Old Wesley played Lansdowne in the final of the O’Connell Cup last Saturday. Old Wesley had already beaten Clontarf and Old Belvedere from the league above them to reach the final. However Lansdowne was going to be a huge challenge as they had won the Metro 3 league with ease and were unbeaten all season. Furthermore their team included some ex-Leinster players and a number of former Irish U20s.

Wesley made a dream start to the second half when Colin Wallace went over for his second try of the match which was converted to leave it 18 – 6. Lansdowne replied with their first try of the game half way through the second half which they failed to convert to make it 18 -11. Wesley defended for their lives but with 3 minutes left on the clock a Lansdowne forward made a break from the half way line and despite some desperate efforts to tackle him he scored under the posts. This was converted which made it 18 – 18. With a minute left on the clock Wesley gave a penalty away and Lansdowne had a kick to win the match in regular time but this fell short and the full time whistle was blown.

Lansdowne started the first half of extra time the stronger and scored a try half way through the first period of extra time. They failed to convert but for the first time in the match found themselves in the lead. Wesley weren’t going to lie down and piled on the pressure in the second period of extra time. Their pack had the upper hand all match and had a number of very impressive mauls. Wesley had a line out on the 22 and got their maul moving. It crept slowly towards the line which finished with Jeff Dand crossing the line for a try. Ian Masterson, under serious pressure, kicking the conversion to give Wesley a 2 point lead with minutes remaining. But Lansdowne still had time to mount one more attack and proceeded to pound the Wesley line. They couldn’t find a way through the wall of defence so opted for a drop goal which sailed over the bar to win the game in a cruel finish.

The performance from this Wesley team was truly outstanding. From 1-20 they put their body on the line and didn’t leave anything on the pitch. In fact many members commented that it was one of the greatest team performances from any team in the club in recent history against a Lansdowne side littered with former provincial, Irish U20s and AIL squad players.
Saturday marked the end of number of member’s involvement with this team. Jeff Dand is emigrating to New Zealand and we wish him well, and there are rumours of a few retirements. A big thank you to all involved in coaching and management including Colin Wallace, David Swaine, Stuart Kinlan, Trevor Farrer, Jamie McConnell , Craig Petrie and Scott the physio.
On a final note Andrew Leeson stepped down as the coach of the 3rds after the match. His commitment over the last 9 years has been truly outstanding and he has been a great servant to junior rugby. From everyone involved in junior rugby a big thank you Andrew.

Photos below show 1. the Old Wesley team that played in the final, and 2. A dejected Andre Leeson after the match. 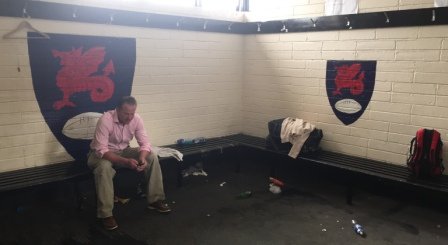