The 3rd XV gained revenge against Clontarf after last week’s defeat in the league by beating the north Dublin side in the semi final of the O’Connell cup.

In a very physical and bruising encounter (see photo below), and against a big Clontarf pack Wesley had to dig deep turning around 21-10 up at half time and playing into a strong wind the team defended for their lives putting in a monstrous defence effort. Clontarf did score in the corner in the last play but Wesley held on for the win, 21-18.

This win means the 3s will play in both league and cup finals.  The team finished top of Metro 2 and will play Blackrock 2s in the league final.

The cup final is this Saturday in Donnybrook at 6.30pm against Terenure, with the league final the following Sunday, April 14th at 1.30pm.

All support would be greatly appreciated. 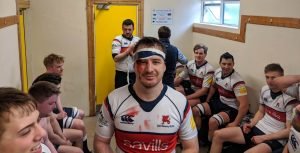 The Battle of Clontarf !