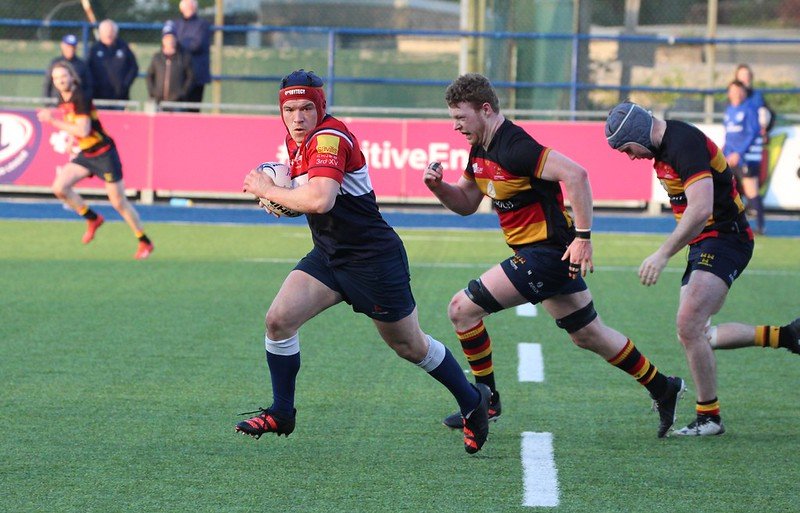 Old Wesley gained revenge over Lansdowne in the O’Connell Cup final having been beaten by them in the 20/21 cup final which was run at the start of this season. The 3rds had endured a tough league campaign.  They suffered numerous injuries and at times didn’t close out games that they should have won, so the cup campaign was an opportunity to put a disappointing league campaign behind them.

The final pitted two old rivals on the way to the final.  Wesley had beaten St. Mary’s, Terenure and Seapoint and the team picked up a number of injuries during the early rounds of the campaign.  Team stalwarts Scott McDonnell, Geoff Dand, Ivan Campbell, Richie Jermyn and Mulcaire O’Meara were all absent from the match day squad, but it’s a testament to the squad that we were able to replace these players from our rich pool of junior rugby resources.

Conditions were perfect, if not a little chilly.  The first few minutes were even with both teams trying to get a foot hold in the game.  Wesley opened the scoring with a well struck penalty by Tim Hawe after 3 minutes.  The first real try scoring opportunity of the game came in the 15th minute when Tim Hawe made a lovely line break but unfortunately the final pass didn’t go to hand, and as a result the ball was knocked on. Wesley started to dominate territory and this paid off when, from a line out, the ball was moved to mid-field were Paddy Davis made a break.  The ball was recycled.   Michael Kearney carried again and quick hands by Tommy Emo and Stephen Boyle eventually found Sean Balance who touched down in the corner.  The difficult conversion was missed Wesley but led 8- nil after 20 minutes. The lineout was working well while the scrum was working hard to hold their own.

Lansdowne eventually got off the mark with a penalty after 25 minutes Wesley had another opportunity 5 minutes later when Tommy Emo carried strongly.  Phil O’Leary passed to Paddy who made a fantastic off load to David Braithwaite who chipped ahead.  It looked as if he had been taken out by a Lansdowne defender but the referee didn’t agree and Lansdowne cleared their lines.  Wesley were reduced to 14 men when captain Jamie Boyd saw Yellow for tackling a player in the air. Wesley gave away another penalty 2 minutes later and with the extra man Lansdowne decided to go to the corner.  From the resulting line out they went through a number of phases which resulted in their openside touching down.  They added the 2 points and Lansdowne lead for the first time 10-8.

7 minutes before half time Mark Fitzgibbon picked up a loose kick in our half and made a great break well into the Lansdowne 22.  He popped the ball to Phil O’Leary who found Craig Telford in support who touched down in the corner.  This would turn out to be the try of the match.  The difficult conversion was missed.  More pressure followed and there were fine carriers lead by Tommy Emo, Sam Moore and Conor Boyd, who was everywhere on the day.  This pressure led to Lansdowne giving away another penalty which was converted to leave the half-time score 16-10.

Wesley started the second half strongly with Stephen Boyle, Eric Parfrey, Dan Hall and Michael Kearney all carrying strongly and driving Lansdowne backwards.  The penalty count was mounting against them they were reduced to 14 men after 50 minutes.  5 minutes later another yellow left Lansdowne with 13 players. The Wesley pack was turning the screw and well on top with carry after carry.  Wesley kicked a penalty to extend the lead to 19-10 and on 63th minute Tim kicked another penalty to give Wesley a deserved 22-10 lead.  Mark McDonald came into the front row and helped Wesley to start to get the edge in the scrum.

Wesley released the rest of the bench and Colin McDonald, Luke Corish, Gary Hawe and Cal Lynn all made an instant impact and made sure Lansdowne remained on the back foot.  Another penalty increased the lead to 25-10 with 10 minutes remaining.  Lansdowne did score a late try but this was to be the last score of the game.  It finished 25-15; a deserved win, and a junior cup double on the day with the 5ths winning the Winters cup earlier in the day.

Tommy Emo was the deserved man of the match.  He never missed a tackle all day and haunted Lansdowne with every carry.  Jamie Boyd led the team on the pitch which was coached by Brian Hastings, Jamie McConnell and Andrew McCrann, and managed by Stuart Kinlan and Alan Johnson.  Thanks to Nigel, Robbie and Ronan for their support.

This was not the last junior game of the season as the juniors head to Spain in a few weeks where a Robbie Love coached team will take on Rugby Club Granola.