The 5ths travelled to Gorey last Saturday (23rd January) and when the management committee sat down on Friday night and reviewed the next days farming forecast wind and rain was predicted to be the order of the day in the sunny south east. So they decided they may need all the experienced players they could muster for such a trip. The large panel of 15 arrived down and after some pre match motivation by the famous high school coaching team of Love and Johnson and local knowledge by O’Brien they took to the field and played against the gale and up hill in the first half.

Wesley opted for a more territorial first half type of play with Brian Leveau sitting in the pocket and kicking the corners along with some clever box kicking by Richmond. Wesley’s opening score of the game came after a great line out drive that was then fed to centre McDonald who charged over for a score which he failed to convert. Wesley were forced to defend their own line for large portions of the first half but managed to repel the Gorey attack led by their captain Paul Swaine. We led at the break 12-0.

The second half saw Wesley draw first blood again with John Love crossing on the end or a great move that started on their own 22 meter line. But Gorey then began to come into the game strongly after the ref deemed it necessary that Dave Bursey should have a 10 minute break for his own and those players around him’s good. During this 10 minute spell Gorey started to maul the ball and their efforts were rewarded with both a converted penalty and converted try. This left the 5s lead the game a close 17-10 with 20 minutes left on the clock. With Bursey back on the field that marked the end of the Gorey comeback and Lavue and Richmond masterfully pulling the strings to play the remaining 20 minutes in the opposition half yielding two more tries. The last of thes was a great move worked up the wing by hooker turned winger Ian Pollock who set up Colin McDonald for his second; Colin did have support from Pat on the inside but opted to take the score himself. It was believed to be a topic of heated debate on the way back to Shankhill and Colin’s pocket money has been docked accordingly.

The selection proved that Gold is Good when 6 players “of an age” featured in the Old Wesley winning team. The average age is a secret but it  is 40 very plus.  For the record Old Wesley won 27-12 and were highly complimentary of the home team hospitality. The 6 players – see photo – include (LtoR) Pat McDonald, Graham Richmond, Ken Hanning , Stu Kinlan and Dave Bursey. The game was watched by extended members of the Swaine and Bursey Family along with our own Junior Deputy President Paul Short who all commented on the high level of rugby given the conditions and “experience” of 40% of the Wesley side. 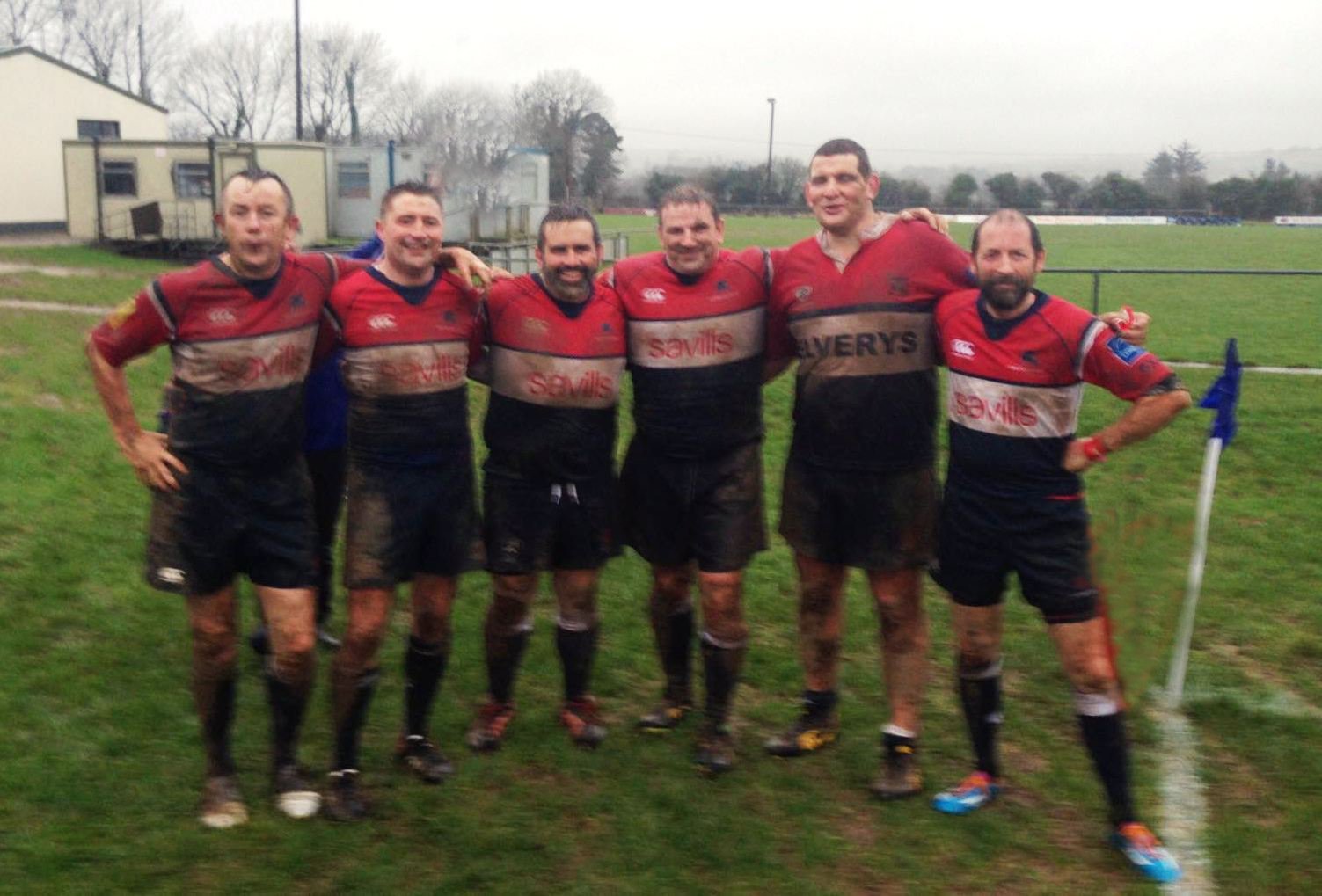