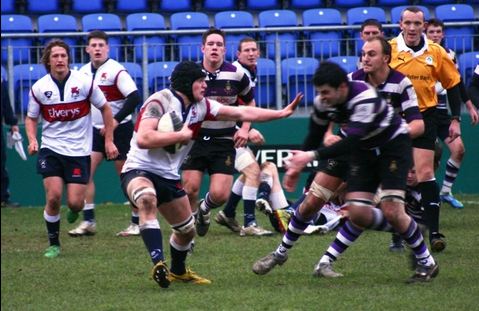 Old Wesley, short a number or regulars, suffered a heavy defeat to Terenure in Division 2A of the Ulster Bank League at Donnybrook.  Their second defeat of the campaign leaves the Donnybrook side in 4th place in the table and 5 points behind the leaders, Dublin University at the Christmas break.

A try count of 5 to 2 against usually tells its own story, and this was no exception.  Old Wesley were forced to play second fiddle throughout to a highly motivated, physical and efficient opposition.  Feeding off a steady supply of good quality ball the visiting backline had too much pace and guile for their Old Wesley counterparts, who lost fly half Dan van Zyl to injury early on.  Through no. 10, David McAllister, Terenure were able to control the pace of the game, playing territory to great effect, and frequently exposing the home defence out wide.  In comparison, Old Wesley were somewhat predictable in their approach, spreading the ball regularly but lacking the penetration to trouble the visitors defence.

Terenure started aggressively and enjoyed most of the early possession and territory. It was no surprise when they opened their account on 12 minutes with an unconverted try following a backline break on the Old Wesley 22 metre line.  This appeared to spark Old Wesley into action with captain Tristan Goodbody and lock Philip Hosie leading some good forward drives and centre Nigel Kinlan making ground in the centre.  Handling errors combined with their predictability meant that the Old Wesley attacks were easily repelled and it was Terenure who extended their lead with a penalty goal on the 20 minute mark following an incident which saw Philip Hosie sent to the line for a ten minute break.  A loose kick ahead on the half hour mark was easily fielded by the visiting full back, who set his winger free for a converted try and a 15 – 0 lead.  With their line out misfiring, Old Wesley struggled for possession and were forced to counter attack at every opportunity with Rory Stynes prominent.  However, matters got worse for the Donnybrook side as the interval approached when a neatly taken drop goal extended the visitors lead to 18 – 0.

Old Wesley almost conceded directly from the restart but a last ditch tackle by wing Barry McLaughlin saved his side. The same player was unlucky to see a long range penalty hit a post before the home side conceded again.  This time the score was self inflicted when, following a ruck won close to the half way line, the ball was flicked up to the welcoming hands of an oncoming Terenure player who had little difficulty sprinting over for another converted try.  A few short minutes later a loose pass in the home backline was seized upon for an easy run in and a bonus point try for the visitors.

With the score at 32 – 0 and almost half an hour left, Old Wesley set  about regaining some pride.  This they did to their credit.  As the game approached the final quarter winger Ross Johnson finished off a good move.  Barry McLaughlin converted.  Despite further pressure the Terenure defence stood firm until the final move of the game which ended with Tristan Goodbody burrowing over to leave the final score 12 – 32 in Terenures favour.

This was a disappointing result for Old Wesley who never got to grips with a well focused Terenure outfit.  The absence of a number of regulars did not help their cause nor did the concession of soft tries.  Looking at the wider picture, 4th place and 25 points at the Christmas break leaves Old Wesley in a healthy position and they can look forward with optimism to the remainder of the campaign.