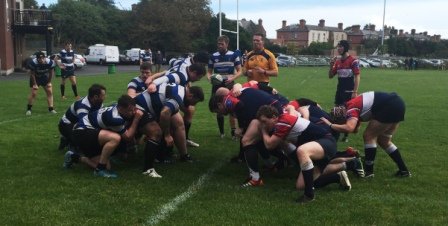 (15th Oct) After winning the previous week by seventy-nine points, the Old Wesley Thirds knew that Wanderers FC Seconds would provide a more challenging test. And so it would prove to be. Despite torrential rain overnight, the game was played in good conditions and the pitch was firm. This suited the Old Wesley team, who started the game at a high tempo. Early scrum dominance on the back of a strong front-row performance yielded a couple of penalties that Kenny McLaughlin converted, and Wesley threatened the line on a number of occasions. As the first half progressed Wanderers came more and more into the game, but Wesley maintained the upper hand and a Kenny McLaughlin try and conversion brought his and Wesley’s total to 13 for the first half.

The second-half was a much more even affair. Wanderers came increasingly into the game making a number of line breaks that they failed to convert. Eventually they got on the score sheet with a penalty but Wesley responded with a Mark Rouse try to keep a healthy gap between the teams. As the game entered the last ten minutes, Wanderers scored a good try to bring the scores to 20-10. The Wesley defence remained stout after that though and Wanderers were unable to close in for a losing bonus point.

Attention now turns to a clash with Stillorgan RFC’s firsts next Saturday at Donnybrook. While we are just four games into the season, it is a Metro Division Three top of the table encounter; Old Wesley stand in first place on 18 points, while Stillorgan are on 15, having won three and drawn one match so far.