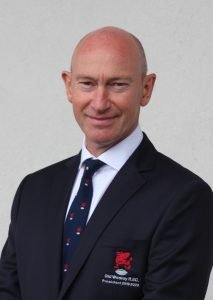 It is a great honour and privilege to be elected President of Old Wesley for 2019/20.

On behalf of the members I would like to extend a warm welcome to all of our visitors, sponsors and match officials to Donnybrook and I hope you will all enjoy the hospitality that Old Wesley is renowned for.  I can assure you that you will be well looked after by our Club Manager Michael Weafer and his team.

2018/19 was a hugely successful year on the pitch with our 1stXV winning Leinster Senior League Div 2 and finishing 2nd in AIL 1B and losing to UCC in a playoff for promotion to 1A.  Our 2nd XV finished second in Metro League 1 and narrowly lost both the League Final and Metro Final to Lansdowne.  Our 3rd XV won the double, Metro League 2 and the O’Connell Cup.  Our 4th XV won the Moran Cup and the 5th XV won Metro League 6.  Our U20 XV won Premiership League 2 going through the league season unbeaten and lost in the Purcell Cup Final. We were also voted Leinster Rugby Referees Club of the Year for a 2nd year in a row.  We have a very active Touch Rugby section who have won competitions domestically and abroad.  Ballycorus is a busy place on a Sunday morning where our minis and youths train. Thanks to Patricia Parfrey and all of the parents, coaches and managers who give so willingly of their time.

Congratulations to Robert Deacon on being elected President of Leinster Rugby. We wish him all the very best for his term in office.

Rugby clubs simply wouldn’t function without the support of sponsors.  In particular I would like to thank our main sponsors Savills and their CEO Angus Potterton for their continued support. To Dave Jermyn and Arachas for their continued loyal support and to all our sponsors – your support is greatly appreciated.  Thank you to Alan Chapman, for once again creating another excellent programme and to all of the advertisers who continue to support us. Please support them as best you can.

I would like to offer a special word of thanks to all of our volunteers. Your dedication and commitment is much appreciated and I would encourage and ask you all to get involved in any way you can. #Club for Life

I look forward to seeing you all in Donnybrook during the season.

Adrian joined Old Wesley after leaving Wesley College in 1984. In his first year at the age of 19 he played on the Old Wesley senior team that won the Leinster Senior Cup Final. He was a regular senior player for many years and also became part of club history scoring the winning drop goal against the Barbarians in 1991.

He is married to Suzanne and has three sons, Greg, Tim and Gary, all of whom play for, or have played for Old Wesley.