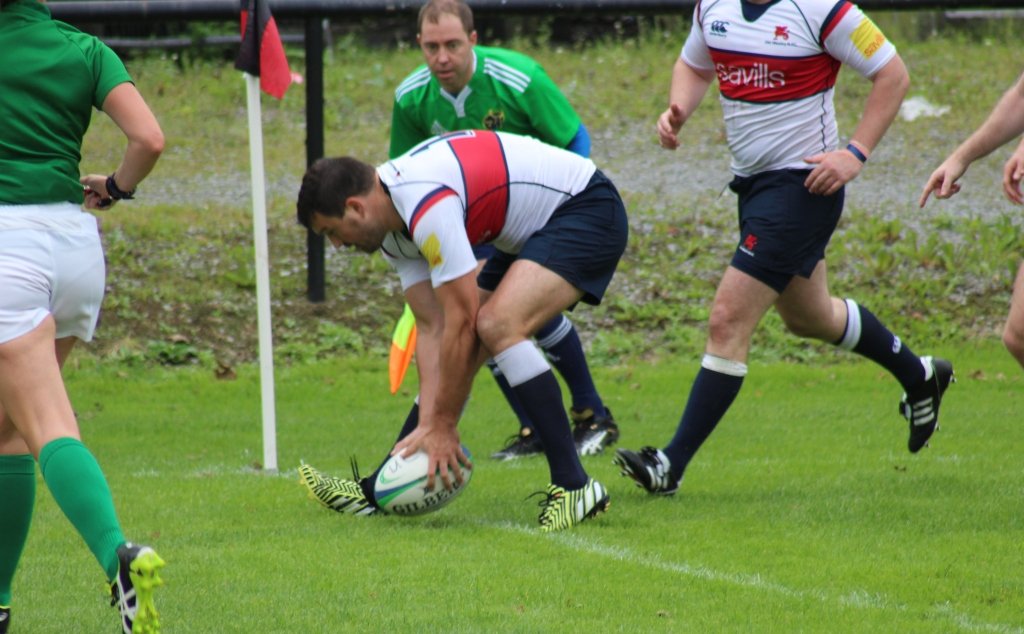 Old Wesley opened their 2016-17 AIL campaign with a hard fought but marginally deserved win over UCC in a match separated by just one missed penalty kick. The game was played in the beautifully located Mardyke stadium in Cork in ideal weather and pitch conditions.

From the start UCC proved that their front row was a force to be reckoned when they took the first scrum against the head.  However Wesley got the next one right launching an attack into the opposition 22.  After a series of moves by both sides Old Wesley had a scrum 12 metres from the UCC line.  A back line move brought the attack to the goal line.  From quick recycled ball the Wesley backs were queuing up to score and it was Ger Finucane who had the honour of dotting down for the first try of the match after 10 minutes.  Barry McLaughlin converted to make it 7 nil to Old Wesley. Soon after the Wesley scrum was in trouble again and were forced to concede a penalty. The hosts had no difficulty in converting from 30 metres out; although the touch judges did take a long time to put up their flags.

Entering the second quarter of the match the Cork students were in a strong attacking position in the Wesley 22 and when mobile flanker Conor Barry saw a gap he darted in for UCC’s first try. Kevin O’Keeffe converted from in front of the posts giving his team a 10-7 lead. Minutes later a blocked down kick had UCC on the back foot. Ger Finucane picked up the loose ball bringing the counterattack into the 22.  He passed to Stephen Boyle who looked to get over for a try but the referee adjudged a knock on; a decision that photographic evidence later proved to be correct. There were no further scored before half time and UCC retained their 10-7 lead.

The second half saw substitute Mark Rowley come on and he immediately started to make his presence felt with some good carries. UCC failed to capitalise on a penalty for a high tackle and suffered a double whammy when their out half Charlie O’Regan was shown a yellow card for a dangerous tackle. Old Wesley looked to move the ball wide and Paul Harte was nearly in for a try only to be denied by the touchline.  UCC’s indiscipline continued and McLaughlin had no difficulty in kicking a penalty goal from 15 metres out to level the score. UCC continued to infringe at the ruck and McLaughin converted two further penalties, one of which resulted in a yellow card for Richard Moran. But O’Keeffe reduced the gap again to 3 points with a well struck long range penalty kick from a deliberate knock on.

With 8 minutes remaining a break by Old Wesley newcomer Isaac Leota brought play into the opposition 22.  He timed his pass perfectly to Paul Harte who, still with a lot of work to do, bundled over for a try.  McLaughlin again successfully converted to give Old Wesley a two score lead, the first time in the match for either side. But the students were far from giving up and 5 minutes later influential prop Peter McCabe crossed for a try. O’Keeffe again converted and it was back to a 3 point score difference. However Old Wesley did just enough to cling on before, to the relief of the small group of travelling supporters, the referee blew the final whistle.