On a beautiful autumnal afternoon, Wesley put up an improved performance against a strong well-balanced Shannon side, but were punished severely for some basic errors committed throughout the game.

Wesley started very brightly and, after some driving play by the forwards, Donnchadh Phelan crashed over under the posts for a great try after 5 minutes. Josh Miller added the points. Shannon bounced back almost immediately and Conor Fitzgerald knocked over an easy penalty to reduce the margin to 7-3. The Shannon pack were on top in the scrums, with Munster hooker, Duncan Casey, leading the pressure on  Wesley in this area. After 12 mins, Shannon drove over the Wesley line after a rolling maul, with the try accredited to Casey. Fitzgerald missed the conversion to see Shannon 8-7 ahead.  Wesley’s line out was working well and this provided a good supply of possession, but they were unable to break down a very disciplined Shannon defence. With Wesley conceding a scrum penalty, Shannon put the pressure on again with a sweeping back movement and, on 25 mins, Fionn McGibney glided through a gap in midfield to score comfortably, with the conversion missed again ( 7-13 Shannon).

Wesley stormed back and exerted strong scrum pressure , which resulted in a penalty, which led to a period of dominance which, unfortunately, could not be translated into points on the board. Having absorbed the Wesley pressure with excellent defence, Shannon applied a vital sucker punch on 37 minutes with an interception by Conor Fitzgerald outside his own “22” to run the length of the field for a converted try against the run of play ( Half time 7-20 Shannon).

Wesley commenced the second half with a spirited attack and, on 45 mins, after an excellent catch and run by lively winger, Eoghan O’Reilly, hooker Dave Rowley finished off some excellent phases by storming over to the right of the posts. Unfortunately, the  conversion was missed, leaving Wesley still 8 points behind on 12-20. This try spurred Wesley into action and heralded their best spell of the match, with very promising performances from, among others, O’Dea and Murphy in the pack. Scrum half, Adam Kennedy put through an excellent kick to keep the pressure on the Shannon defence. On 48 mins, Wesley created an excellent turnover, but in a potentially pivotal moment, a wayward pass  in midfield saw the try opportunity spurned .

Both captains earned yellow cards during the frantic exchanges which ensued , with Darren Horan getting ” 10 minutes” on 53 , to be followed by Lee Nicholas on 57.  Two missed penalties by Fitzgerald kept Wesley very much in the game but the Shannon defence held firm .Shannon got the crucial next try on 66 mins, when , after an excellent run by Duncan Casey, no.7 Kelvin Brown touched down under the posts after quick recycling (12-27 Shannon).

To their credit, Wesley never gave up and , despite a few basic errors and interceptions, they continued to pile on the pressure and, after an excellent back movement, accomplished centre, James O’Donovan crashed over for a great try, which was not converted (17-27 Shannon). With 3 mins left on the clock, Wesley still had a chance to secure 2 bonus points but Shannon hit back immediately to seal the issue with a converted try by substitute winger, Eathon Moloney after he intercepted Wesley’s attempt to snatch a vital 4th try. ( Final Score 17-34 Shannon ).

Whilst the home side and their supporters will undoubtedly be disappointed with the result, there were some very encouraging aspects which, if accompanied by greater composure and the reduction in basic error-count, will definitely lead to winning performances in the near future. 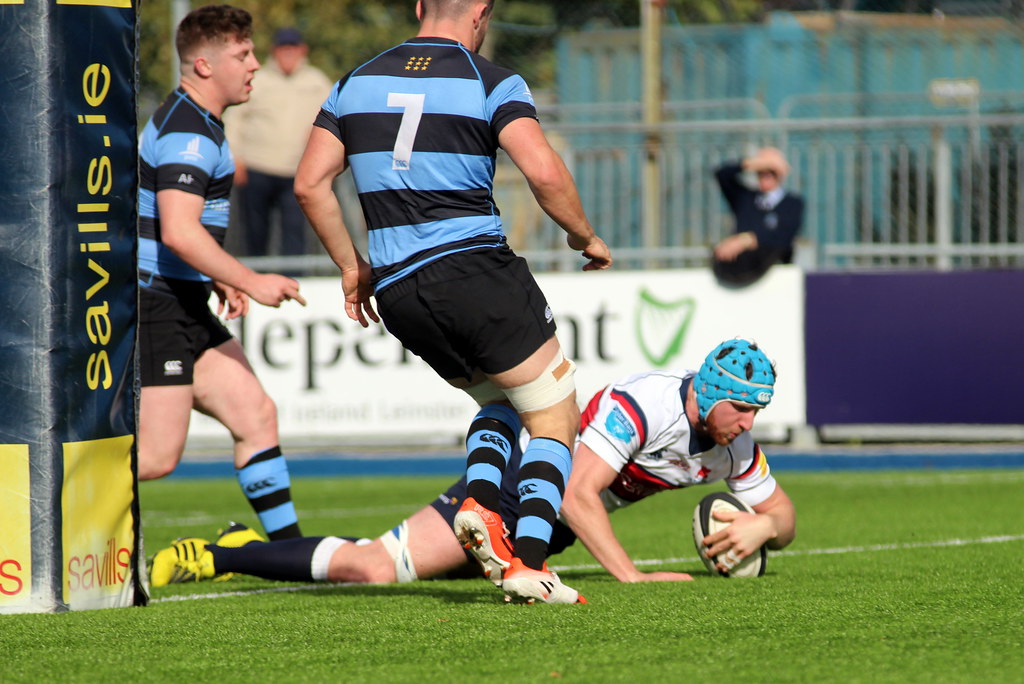