Despite a number of false starts Old Wesley took a bonus point win over Old Belvedere at Donnybrook, with a particularly well fashioned second half.

Wesley started the stronger pinning the visitors in their own half and making a number of visits to their 22.  However on more than one occasion the attacks broke down as a result of handling errors. Despite the strong start it was Old Belvedere who were first on the scoreboard.  The Wesley defence looked to be caught off guard when a strong run was finished off by Belvo full back Fergus Flood, touching down for a try.

Wesley had a chance to get off the mark with a long range penalty kick but Josh Miller was just right of the posts. Then a line out 17 metres from the Belvo line ended with another knock on.  Just after the water break Belvedere winger James McKeown picked up a loose Wesley pass, sprinting over 50 metres untouched for a try.  The conversion by Justin Leonard gave Belvedere a 12 nil lead.

It wasn’t going well for the home side, but from a fairly harmless looking position the ball went out to William Fay who made a 25 metre run from the half way line, well supported by Ben Murphy and Nathan Randles.  With a 3 on 1 he passed to Randles who ran in unopposed to score in the corner.  This time Miller was perfectly on target with the conversion.  Shortly after, from a 12 metre line out prop Harry Noonan looked like he might add to the Wesley score, but was penalised for a double movement, leaving the score line 12-7 to the visitors at half time.

Wesley started the second half with growing enthusiasm.  They gained ground into the opposition 22, but then conceded possession.  From the ensuing scrum their scrum half threw a bad pass, totally missing his out-half for the ball to run over the dead ball.  From the 5 metre scrum the Wesley pack piled on the coals, and with Belvo under pressure, scrum half Ben Murphy dived over for a try.  The conversion was missed leaving the scores level.

Belvo went straight back at Wesley with some well worked phases.  However an intercept by Tommy O’Callaghan saw him sprint from the Wesley 22, until he was tackled just 5 metres short of the opposition line, eventually resulting in a Belvedere line out.  However their line out malfunctioned and prop, Harry Noonan picked up a loose ball.  After 2 or 3 pick and goes, fellow prop Sam Illo bundled over for try number 3, which was converted by Miller to give Wesley the lead for the first time in the match.

Old Wesley were dealt a blow when Nathan Randles was penalised and yellow carded for a deliberate knock on.  However it had little impact on the scoreline.  A high tackle by Belvo allowed Paddy McKenzie kick a penalty from 30 metres in front of the posts.  And a minute later Leonard got the points back with a penalty from a similar position.  Following the restart, which Wesley won unchallenged, Illo was in action again with one of his powerful runs.  This eventually resulted in Belvo conceding a penalty which Rory Stynes kicked with ease for a 25-15 lead.

On 29 minutes, just as they were starting to look dangerous again, Belvedere were in trouble when Michael Stapleton saw yellow for dangerous use of the forearm in attack.  This allowed Wesley to relieve the pressure however despite being down a man the visitors went on a late rampage.  This resulted in them being awarded a penalty on the Wesley 22.  Leonard converted the kick with ease to make it a 7 point game with 4 minutes to go.

From the restart Wesley again gained possession, this time through Mark Robinson.  After Belvo conceded a penalty Wesley went down the line earning a line out 7 metres out.  Iain McGann won perfect possession and after some neat passing Luke Thompson fended off a tackle, and dived over for a try inches from the touchline.  The difficult conversion was short but with time now virtually up Wesley kicked the ball dead for end of match.

It’s a pity that supporters from both sides are unable to attend but with modern technology they were able to watch the match live-screened, and even with a commentary.

Don’t forget, our Tom O’Brien who brings you the game live also brings you “The game in 5” which will be posted every Monday on our Facebook page after each Energia Community Series. It will be a 5 minute highlight video of the game. The latest video is our 30-18 win over Old Belvedere last Saturday detailed above. 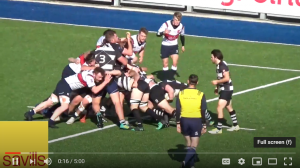 Make sure you like the us on Facebook so you can stay up to date with all the latest news, photos and videos.