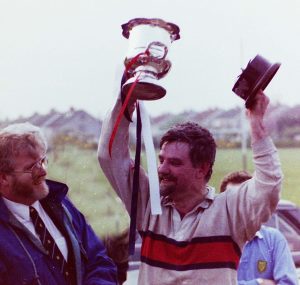 It is with great sadness that we have learnt of the death of Brian Sinnott.

Brian was a very popular junior player who joined Old Wesley in the 1970s and played during the 70s, 80s and 90s.  Affectionately known as The Owl, he was a solid and reliable prop who turned out on our junior teams for many years.  He was the Captain of the Guilfoyle Cup winning team of 1988 and coached the same team in 1995.

Brian was a popular tourist and was well known in Kings Norton and other junior tour venues.  He also has the honour of achieving a hole in one at the Old Wesley Members Golf Outings a number of years ago.

After retirement Brian moved to live in Newport, Co Mayo, but still made it his business to call in to see his old friends in Wesley whenever he was in Dublin.

We extend out sympathies to Brian’s wife Eithne, his children, grandchildren, and the rest of his family at this sad time.