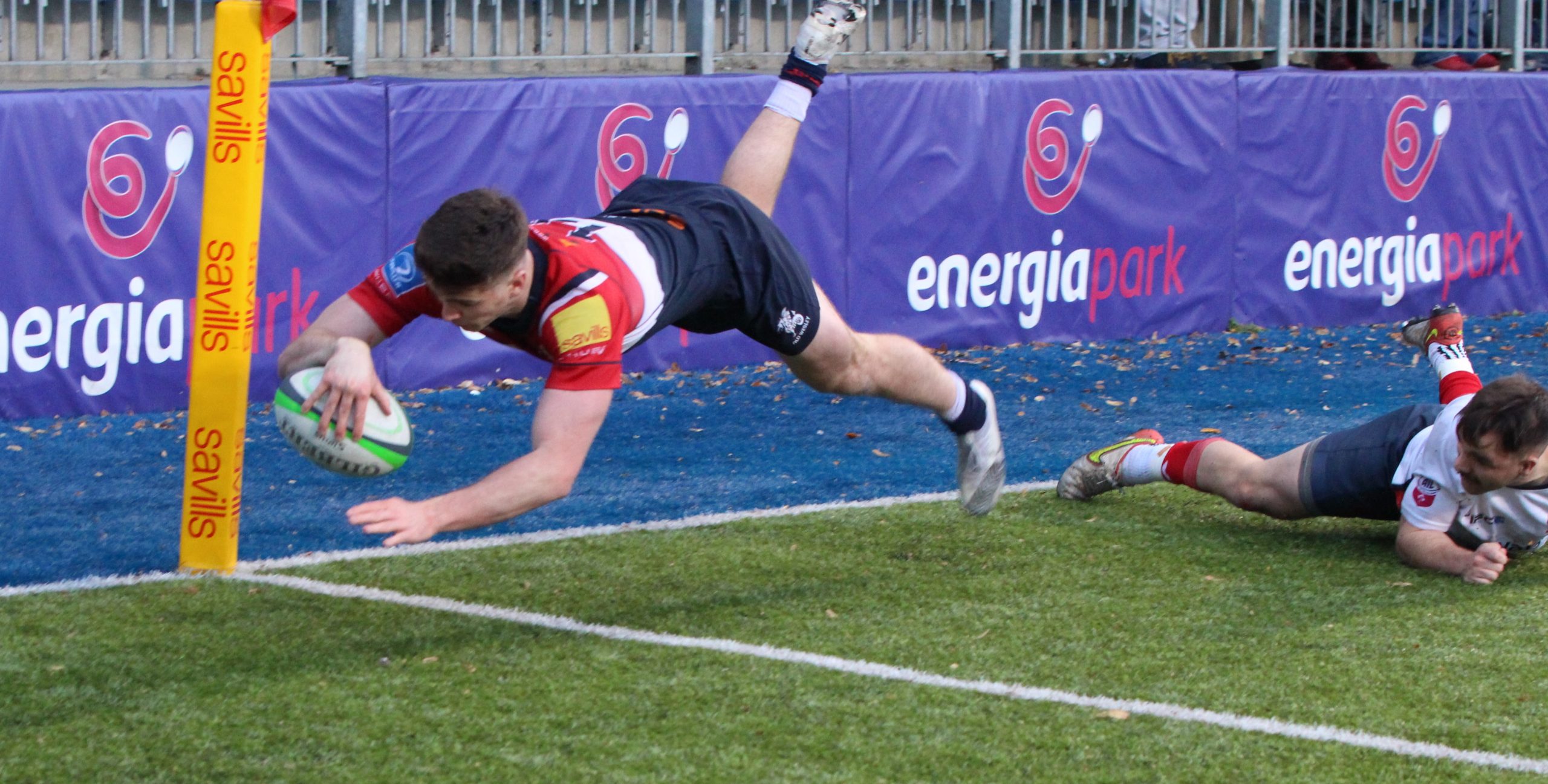 The accurate place kicking of Ian Cassidy was the deciding factor in this keenly contested match. The try count was 3 apiece, but Cassidy converted 6 of his 7 attempts while his counterpart could only manage 1 out of 4.

Old Wesley laid their marker down early when Iain McGann stole Malone’s first line out.  Indeed, a much improved Old Wesley line out started very well.  A thundering run by Cronan Gleeson took Wesley deep into Malone territory, and when they conceded a penalty Ian Cassidy kicked the points from 23 meters.  A few minutes the visitors levelled matters with a penalty goal by Rory Campbell after a high tackle by an Old Wesley player.  Then 10 minutes into the game a neat break by Alex Molloy had Malone on the back foot.  He passed to David Poff who passed to Cassidy and back again to Poff for the first try of the match, converted with ease by Cassidy.  Wesley continued to pile on the coals with Cassidy kicking 2 further penalty goals to take the lead to 16-3 after 18 minutes.

The dream continued for Wesley when Poff was on hand again with a sprint down the left wing to score his second try in the corner.  Cassidy nailed the difficult conversion to make it 23-3.  A yellow card to Gleeson after a deliberate knock on gave the Ulstermen their first try scoring opportunity.  With Wesley down a forward Malone opted for the scrum, but Wesley escaped when the opposition were penalised shortly after.  Minutes later the visitors were again applying the pressure. When awarded a penalty surprisingly they opted to take a quick tap; and it paid off when they crossed for their first try by Dan Kerr.  Wesley responded but it came to nothing leaving the half time score 23-8 to Old Wesley.

Now with their tails up and with the wind advantage Malone started the second half with gusto.  After just 30 seconds they were awarded a penalty.  Once again, they opted for a quick tap and after further carries Neill Alcorn crossed for a try, but the relatively straightforward conversion came back off the upright.  Then Poff looked to be in for his 3rd try.  A clearance kick by Malone was fielded by Sam Pim. After a couple of passes Poff found himself at full pace down the left wing.  He crossed and grounded in the corner however the touch judge had the flag up for a foot in touch.  Malone responded and had the Wesley defence on full alert.  Another yellow card for a deliberate knock on by Alex Molloy added to their woes, and shortly after, the visitors crossed for their third try by substitute Peter Caves.  The conversion was missed, but it was now a 5-point game.

Worryingly Old Wesley continued to spend time in their own half.  However, they eventually lifted the siege and from a scrum on their 22 Malone infringed conceding a penalty. From 30 metres out Cassidy did the needful kicking the points to regain the two-score lead.  But the best was yet to come.  After Pim stole a lineout, the ball went to winger Nathan Randles who took off at speed, sprinting over half the length of the pitch to dive over for a dramatic try in the corner.  For once Cassidy missed the conversion but the final result was no longer in doubt.  Malone did respond coming close to claiming their fourth try but it came to nothing before the ref blew for full time.