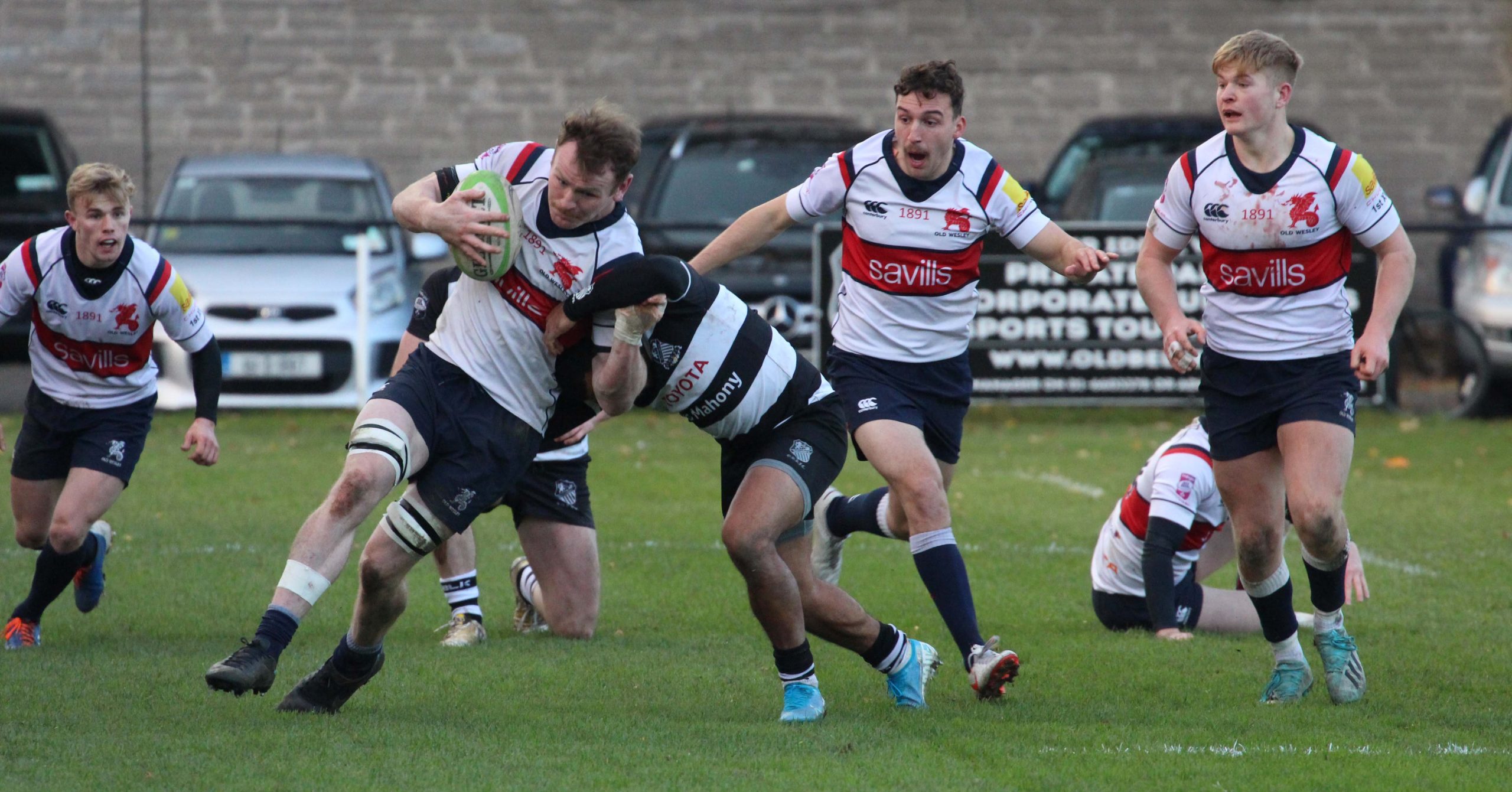 After last week’s blip Old Wesley were anxious to bounce back in this local derby against Old Belvedere at Ollie Campbell Park.  And this they did in style although it was well into the second half before the result was certain.

Wesley had the ideal start taking play into opposition territory.  After 3 minutes they kicked their first penalty to touch inside the Belvo 22.  With JJ O’Dea taking clean line possession the ball swung to the far wing then back again where Reuben Pim found himself in open territory to receive Tommy O’Callaghan’s pass and ground for the first try of the match.  Belvedere responded quickly and had the Wesley defence on full alert.  They nearly crossed for a try only to be bundled into touch by good drift defence and a David Poff tackle.   They did not, however, come away pointless with out-half, Justin Leonard, kicking a penalty goal from near the posts. The home side was then penalised and their full back Colm Hogan was yellow carded giving Wesley a penalty 8 metres out from the posts.  Wesley opted for the scrum.  It paid off when scrum half Ben Murphy showed his agility to nip in untouched and score under the posts.

On the half hour mark Belvedere eventually crossed the line when Hogan, now back on the pitch, finished off a back line move which had the Wesley defence overstretched.  Leonard converted to make it 12-10 to Old Wesley.  A bit of old fashioned argi-bargy then led to both sides being spoken to by the referee, followed by a penalty to Old Wesley and a yellow card for John McKee.  Wesley kicked to touch 15 metres out but Belvo’s defence held.  Wesley then had a great chance to extend the lead just short of half time with a 5 metre scrum and the opposition down a player. But for once the Wesley scrum misfired and they conceded a penalty allowing Belvedere to clear the lines.  Half time came soon after.

If Old Wesley’s first half start was good the second half start was even better. After just one minute and in the opening play of the half David Poff finished off some slick handling by Josh Pim and Conor Gaston to score near the corner.  Minutes later Belvedere were attacking off a scrum inside the Wesley 22. Their attack seemed to have ended when the referee penalised them.  But the penalty was reversed and Leonard kicked the relatively straightforward penalty, putting the home side back to within a score.  Wesley’s response was opportunistic. With Belvo in possession attacking off a scrum from inside their own half Ben Murphy struck again, this time picking up an intercept pass and sprinting 30 metres to score his second try.  The conversion was missed but Wesley were firmly in the driving seat and, win or lose, they had the tries bonus point.

With the match approaching the final quarter the Wesley supporters were treated to one of the highlights of the match.  Will Fay made a blockbusting charge down the right wing, gaining over 30 metres fending off tacklers as he proved very difficult to stop. Passing to Josh Pim, Wesley were back into the opposition 22.  A penalty kick to touch gave Wesley another attacking platform.  It paid off with Ben Burns finishing off a first phase maul off the line out for try number 5.  Minutes later Wesley were in a similar pitch position with a 5 metre line out, but the throw was deemed crooked.   But soon after they had a 5 metre scrum.  With Wesley’s dominant pack, a try looked imminent.  Sure enough, go forward ball and with Belvedere on the back foot, substitute scrum half Charlie O’Regan found the perfect line to cross for Wesley’s sixth try.  Paddy McKenzie converted to make it 34-13. Belvedere came back with a late rally to score a try by John McKee, but it was only a consolation and another successful outcome for the visitors.

Old Wesley continues to hold on to second place in the league with little or no changes in the other league positions.  Roll on next weeks home fixture against Banbridge.

YouTube summary of game -Game in 5 from Tom O’B: