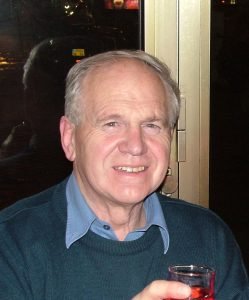 Old Wesley has learned with sadness of the death of Cyril Craven after an illness.  One of our longest standing members, he played junior rugby for Old Wesley after leaving school and was a regular tourist to King’s Norton and other venues.  Although he worked in finance he was skilled with his hands, and did a lot of building maintenance and development work in our clubhouse at a time when most of this work was carried out on a voluntary basis.  He was one of a small number of members who installed the showers and plumbing in our old wooden pavilion in Donnybrook.  Cyril was not one to be seen holding court at the bar, but rather a quiet and sometimes shy man.  He was a great supporter of Old Wesley and a regular attendee at club dinners and social events.

We extend our sympathies to his children Trevor, Janet and Mervyn, and their families; and also to his niece Helen Sheridan.  He will be sadly missed by his many friends in Old Wesley.