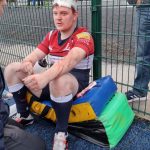 Rugby is a simple game when you break it down, do the basics well and not give the opposition easy opportunities to accumulate points. If those 2 principles can be executed then you have a more than even chance of winning.

The theory is a lot easier than the reality and for 20 minutes Old Wesley (playing into a stiff breeze in Castle Avenue) took an early lead through the boot of Eoin Quinn following an infringement 10 metres outside the Tarf 22. This lead was held for 10 further minutes, 3 line outs were stolen and overall the visitors looked to have the measure of the Tarf side who were looking for their first win in the league. However, 3 lapses in concentration, poor defensive sets and not being clinical in defending the channels and Clontarf were 19-3 up by the 30 minute mark.  To their credit and with some well worked territory and possession Old Wesley scored a try with Peter Costello crashing over and a very well struck conversion from Quinn left the teams 19-10 at half time with the wind in Wesley’s favour in the 2nd half.

From the kick off, Wesley with a player still in the bin from the end of the 1st half,  let Tarf inside their 22 move who the ball and were under the sticks for a well taken try and the score moved to 26-10 to the home team. With the wind advantage you could see how Wesley could settle the ship and play territory to eat into the lead. Wesley made clever use of the bench in the 2nd half with the returning Jack Fish, the industrious Josh D’Alton and hard hitting Khafu Momoh all making their presence felt when they entered the game.  The score remained the same and time after time the visitors were not able to capitalise on possession or position on the pitch and didn’t add to their own points tally.

Instead Clontarf took 2 easy scores towards the end of the game and added a further 12 points to mean the final score moved to 38-10, which was flattering to the home team but the Wesley 20s need to play smarter and stay engaged for the whole 80 minutes to stop quality teams putting scores on them. Credit to the bench for all coming on and adding to the game and hopefully the Wesley walking wounded will be fully fit for the visit of Trinity next weekend.

Photo – Finn Tierney getting ready for Halloween later this evening, receiving treatment for a nasty cut to the head mid-way through the 2nd half