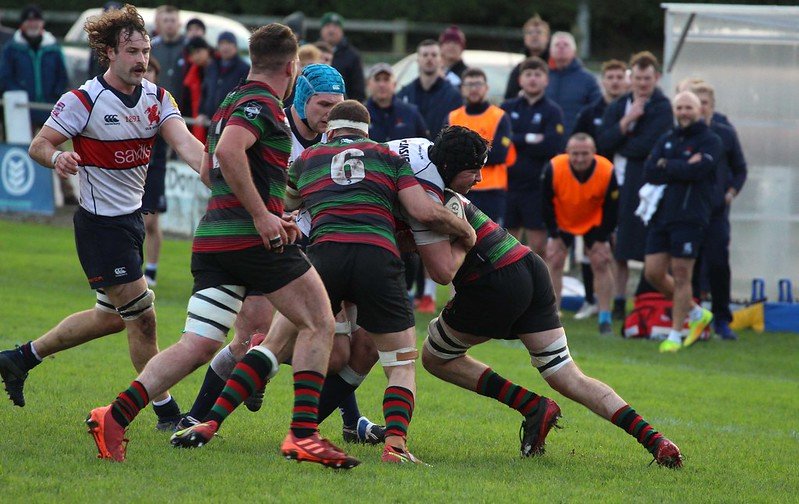 This eagerly awaited top of the table clash proved to be hard fought from start to finish with the Cork side emerging the deserved winners.

For the first ten minutes there was nothing between the sides as both sets of players showed they were going to leave nothing behind on the pitch.  Old Wesley came nearest to scoring when JJ O’Dea got to within 7 metres of the line only to be halted by a conceded penalty.  Then it was Highfield’s chance when they kicked a penalty to touch for a 5 metre line out.  However, the Wesley defence held and eventually escaped with a scrum.

As the half hour mark approached Highfield were starting to make greater inroads. Right on the 30 minute mark the home side were awarded a penalty 20 metres from the posts and out half James Taylor had no difficulty in converting for the first score of the match. 5 minutes before half time Wesley had a scoring opportunity with a line out inside the opposition 22 but they conceded a penalty allowing Highfield to escape.  Indeed the line out proved a problem for Old Wesley for much of the afternoon. Half time – Highfield 3 Old Wesley 0.

Highfield were out of the blocks early for the second half putting the Wesley defence under pressure. The Cork side were awarded a kickable penalty after 3 minutes, and from a similar distance to the previous one, Taylor converted to double the score. A deliberate knock on by Highfield’s Cathal Gallagher was punished with a penalty and yellow card. Ian Cassidy attempted the long-range kick but was off target. Despite being down to 14 men Highfield continued to up their game and Wesley had to use all their resources to prevent a try; but it came at a cost with Ben Murphy being shown yellow for a high tackle.

It was the last quarter before Highfield’s pressure eventually paid off when they were rewarded with a try by, now back on the pitch, Cathal Gallagher, converted by Taylor. And 2 minutes later a scything break by Paddy O’Toole, followed by good handling, resulted in the try of the match, this time by Paul Stack. Taylor again converted from the touchline and it was 20 nil to the home side.

Wesley responded by throwing everything at the opposition.  Following a couple of penalties the visitors secured good territory, and following a number of phases Cronan Gleeson found a gap to drive over for a try, Cassidy converted to give Wesley a glimmer of hope. Highfield conceded 2 yellow cards in the last 5 minutes, but even down to 13 men they were able to hold on. With the clock approaching 80 minutes Wesley ran a penalty from 7 metres, but frustratingly an accidental offside meant the scoring chance was gone.  Highfield eventually kicked to touch to end an all-action last quarter and hard fought match.

So Wesley’s AIL winning streak came to an end, and they must now regroup to face Old Belvedere in the next match next Saturday.