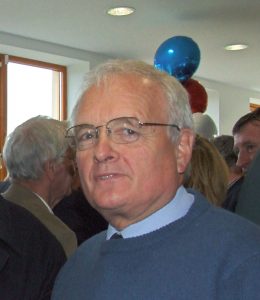 It is with great sadness that Old Wesley notes the death of John Bailey.

John joined Old Wesley after leaving The High School and played for many years on the 1st and 2nd XV teams.  As his playing years got older he continued to play on the lower teams and on a number of occasions proudly played alongside his son Andrew for Old Wesley.  He became involved in a number of rugby and non-rugby activities and became recognised as a very good organiser.  He was elected as a very popular Club President in 1985-86.

After his presidential year John stayed involved in club matters and served as a trustee for a number of years.  He was one of the main organisers of the Thursday occasional lunches which started about 10 years ago.

One of life’s gentlemen John always wore a smile and was a fine ambassador for our club.  He will be sadly missed by his many friends in Old Wesley.

We extend our sympathies to his wife Mary, who also served on the Old Wesley ladies committee, his sons Andrew, Keith and Neil, all of whom played for Old Wesley, and to the rest of his family.