Commenting on the full squad selection, Warren Gatland said: “We believe we’ve picked a squad capable of winning a Test series in South Africa. Selecting a Lions squad is never easy and, in many ways, this has been the most challenging selection I have been involved in. Over the course of the last three weeks the coaches and I have rigorously debated each position.” He went on to say: “However, we are very happy with the squad we have assembled and look forward to meeting up in Jersey in just over a month’s time to start our preparation to take on the World Champions. We’ve left out some very talented players which gives an indication to the strength of this squad and we know how important that stand-by list will be.”

The Irish Times piece by John O’Sullivan in today’s paper (07/05/21) added this to the many plaudits Andrew has received: “A fitting reward for the consistent excellence that Porter has brought to performances in both the blue and green jerseys; he possesses that attractive quality for coaches in that he can scrum on both sides of the front row. Furlong’s injury meant that Porter stepped out of the understudy’s role at club and international level and did so with aplomb. He also possesses power and skill-sets that go far beyond the basic duties and will be a strong contender for the Test 23.”

Andrew Porter spoke to Leinster Rugby TV after the recent Connacht v Leinster game in the Rainbow Cup, the Leinster Rugby TV interviewer noted: “It’s incredible to see that support coming from your old minis club Old Wesley and obviously your mom and dad would have been a huge part of that club, dad still is, great to see that support coming from the grassroots.

Andrew replied: “Yeah of course that’s really what made me the player I am today, grassroots through Old Wesley minis so yes it’s incredible seeing the amount of support I get from them and as well from UCD.” He went on to say, “It’s an incredibly proud moment for myself and my family and hopefully I can make them even more proud”.

From an Old Wesley mini to Lion it’s been a tough and phenomenal journey for this young man. We hope his dad Ernie along with all the Porter and Priestman families are enjoying this moment. 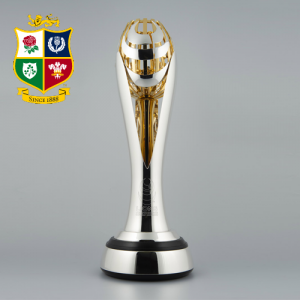