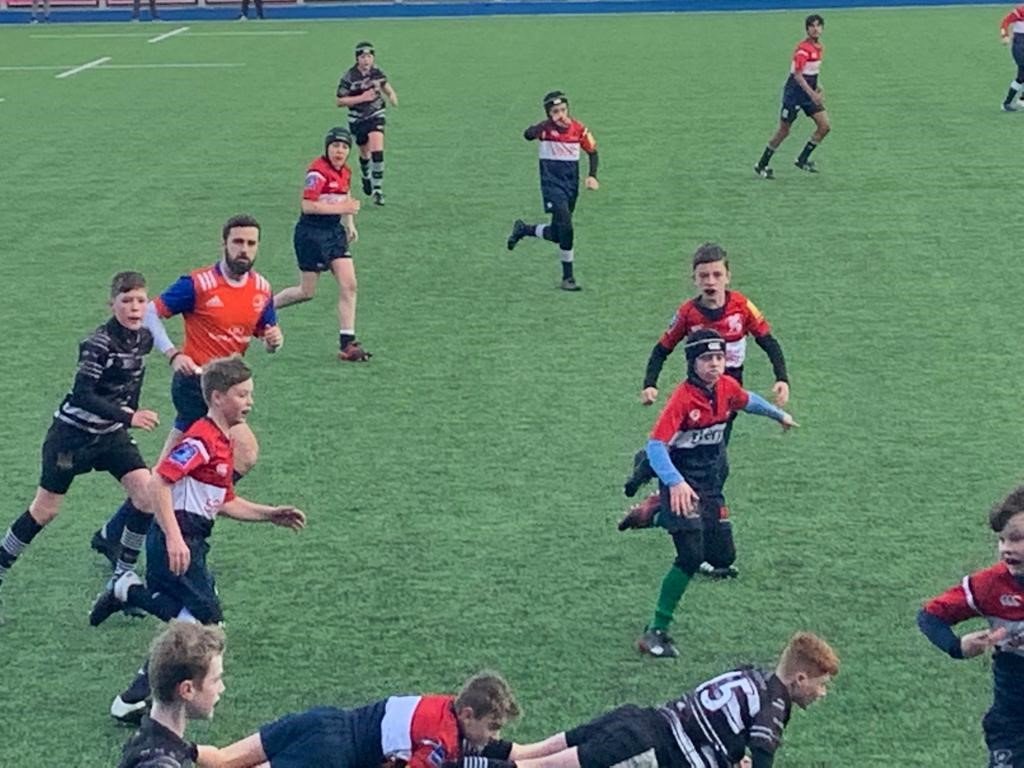 Sunday 9th Jan 2022 was a cold morning in Donnybrook. It was also dry, bright with little or no wind. Ideal for Running rugby. Ideal conditions but behind the scenes things didn’t auger well. No rugby since our last match away to St. Mary’s on the 9th of December. Fast forward to 2022 and many boxes of quality streets later. Wednesdays usual prior match training session was cancelled due to bad weather. The 2009 U13’s were joint top of their league, so we really had nothing to worry about.

Great Tight heads are a rare species, command lucrative contracts and are mainly indigenous to the RDS.

Ryan great hands Saunders No 3 – Out.
Mathew the boot Dignam No 10 – out
Ely Hanna our Viking 5 – out
Alex Bruce our zinger winger 14 – out
Max Hamilton our nippy no. 9 – out

By Saturday evening our first 15 was born from 15. No subs and lots of head scratching. Jiggery pokery was required. Sean Mehigan, our head coach, calmly assured us that our leading try scorer, back rower when not fullback, Dylan Duffy will do a job at tight head. Then simply move Nikil to 5, even though it’s not his most comfortable position, Alex at 6 and Tom to 7. Then move Arnie to 9, Christopher & Christian on the wings and Bobs your uncle!

What about full back? Tight head was sorted but Billy wasn’t relinquishing his recently acquired bundy without the beard role at 12 when Aubery moved in to 10.  Of course – Our new, on the day, full back was always going to be a Gaa player conversion. 20 mins coaching with Stephen Staunton whilst quoting Girvan Dempsey would see to that. Enter Marcus at 15. All set. But where is our head coach. The pre match instructions were coming live from Sean’s mobile field HQ in Thomand park. Raised in a family of 4 older Leinster supporting brothers meant Munster was it.

Ref Conor Hanley checks the boots & chats to the captains. Coin toss over its return to the sideline. Then it’s the usual concise captain’s team pep talk ending with a familiar Wesley war cry.

Dundalk arrived at Donnybrook with 20 players which included 4 of the biggest we have encountered to date. 3 of them in the back row. In addition, their full back was big and athletic looking. Dundalk, third placed in the league, very sportingly offered to drop players if we suffered any injuries. The only 15 were ready to go.

Game starts with Wesley playing towards the Bective end. Within 5 minutes we are down 5 points. 5 minutes later we are back again behind the posts, contemplating 10 nil down. Dundalk showcased a secret weapon. Their full back plays soccer for Dundalk FC, a serious professional soccer club and boy could he move.

Dean Soady, our forwards coach, steps in to join the forlorn players behind the posts. With a Huddle formed he shares some direct words, surprisingly devoid of any profanities given the circumstances. But a rollicking it still was.

Wesley woke up and went on the attack after turning over the ball. A dominant scrum followed on their 22 which allowed Arnie to have a cut. After stepping the cover, he was over the whitewash. Aubrey duly converted. Soon after Dylan scored under the posts after carving thru the opposition from our half. Aubery converted and it was 14-10. Another drive by Wesley, accompanied by superb scrummaging provided another Dylan Duffy try and life was looking good again.

Dean’s halftime Pep talk calmly described how this was our stadium, our pitch and to do the business.

We started well. Christopher Rock went for the line but a foot in touch resulted in a lineout for Dundalk. Good pressure and another Wesley attack look guaranteed to reward but they turned over the ball 2 meters from their try line. Dundalk’s next secret weapon, from the bench was unleashed. A sandy haired winger looped around to the stand side and left everyone dead in his wake. Under the posts and best try of the match so far. 19-17 and the Wesley coach’s and supporters needed something to calm the nerves.

Cometh the moment cometh Dylan Duffy. From deep in our 22, he put the whole Dundalk team on their heels, turned the full back inside & outside and finished purely over the line. A hat trick and what a try. With Aubery’s due diligence its 26-17. Throughout the game many a Dundalk attack looked certain to score but for Billy Brownlie. One such attack required a double tackle 10 meters from our line by boneshaker Billy against two of their big flying machines. We cling on to the lead.

Some great probing runs resulted in significant yardage gains by James and Aubery. This helped keep Wesley on the front foot all thru the game. Nikil and Harry were superb in the loose alongside our hooker Marcus who constantly stole their ball in the scrum. Conor on the loose head side had a superb game and was mobile throughout. Former mini club mate Andrew porter watch this space. Alex and Tom slotted naturally into their new roles at 6 & 7. Both tackled and scrummed down well whilst keeping the red wall intact. Christian gathered the ball so good on reset and kept his wing intact. Christopher also rucked very well in the second half. Arnie at 9 kept them guessing by mixing it up from ruck ball and set piece by sniping and stepping or passing. Wesley were always on the move once the engines fired up. Just as well ref Conor had just recently hung up his boots.

Marcus our full back was tested twice but was always first to the ball. As a result, Dundalk didn’t bomb the backfield again. He covered the line more and more as the game progressed.

Next score – captain Jamie smashed thru from their 22 and along with 3 defenders bundled the ball over the try line. Aubery had injured his ankle but very bravely limped on. He handed the kicking tee to Jamie who duly converted. 33-17 and some daylight.

Later came another ridiculous Dylan try from nowhere and it’s 40-17. Wesley drive to Dundalks 22. A misinterpreted call from the coaches (what do they know) resulted in another try by Jamie. Minutes later the full Whistle blows.

Congratulations to both teams for presenting such an entertaining game of rugby. Thanks to Dundalk for making the trip and for always exemplifying the spirit of rugby. Conor Kane, his team, and supporters are a super bunch and will always be welcome to Wesley. Thanks to Conor Hanley for his transparent referring, the players & our loyal and supporting parents. 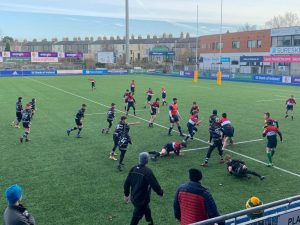