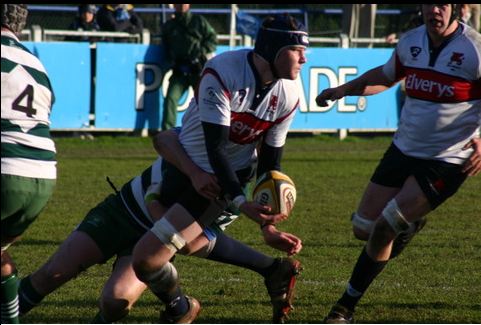 Older members will remember the Leinster Senior Cup Final of 1985 as a tight match played on a sunny and warm afternoon with just one injury time try. By contract this Leinster Senior Shield final, played on a cold day, was a free flowing and entertaining match yielding five tries.

Old Wesley got off to the perfect start with a try after just three minutes and the game still in its first play.  Matt Crockett was credited with the grounding after the pack brought play up to the Greystones line.  It was 50-50 for the next ten minutes until the Wicklow side found a hole in the Wesley back line to cross for a try and even the scores. Shortly after Greystones took the lead with a penalty from under the posts.  Old Wesley responded with some good inroads and on the 25 minute mark Richie Jermyn did very well to ride a tackle and scramble over to restore the lead.  Barry McLaughlin converted to bring the score to 12-8. Both sides exchanges penalties until shortly before half time Greystones looked almost certain to score with a two man overlap.  However Ross Johnson saved the day with a try saving tackle just short of the line. Indeed it was Old Wesley that finished the half the better when McLaughlin converted a long range penalty leaving the half time score 18-11.

Wesley dominated the third quarter of the match with some powerful forward display, particularly in the ruck and maul where Greystones were regularly on the back foot. Despite this they could not convert their dominance into points.  Furthermore Barry McLaughlin uncharacteristically missed two kicks that would normally be within his range. Then, against the run of play and on their first visit to Wesley’s 22 in the second half, it was Greystones that struck with an unconverted try bringing the gap to just 2 points.  Moments later a touch of opportunism saw Ian Cassidy intercept a Greystones back line move to sprint in and score under the posts. McLaughlin converted to restore a comfortable two score lead.

Wesley were totally in control for the final 12 minutes, indeed both John Carroll and Barry McLaughlin came very close to extending the lead only to be denied tries by desperate tackling by the opposition, and the match finished with Old Wesley winning 25-16