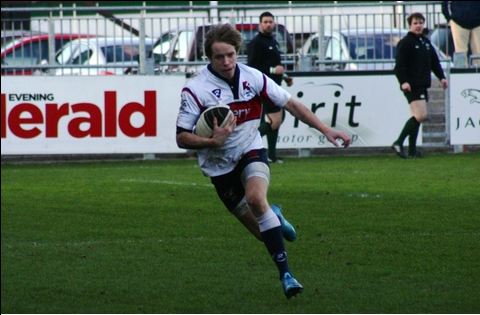 If ever there was a game of two halves this was it. A half time score of 27-nil in favour of City of Derry was turned around in the second half with the end result of Old Wesley being beaten by just one point, 30-29.

Old Wesley started in good attacking form but did not put any points on the board. A Derry break away converted try after 10 minutes was followed after fifteen minutes by another try. The Old Wesley scrum was under severe pressure which gave the Derry half backs a great platform to launch attacks from.  Another Derry converted try after 18 minutes was followed by a penalty at 30 minutes.  Derry scored a further try and a penalty before half time.  During this time Derry were reduced to 14 men when their Captain and Hooker got a straight red card following the intervention of a touch judge.

City of Derry started the second half as they had finished the first with a penalty after 3 minutes, City of Derry 30- Old Wesley 0.  This would seem to have triggered an Old Wesley revival with some good runs by Richie Murphy and more aggressive play all round. After sustained forward pressure Tristan Goodbody scored a try which was converted by Barry McLoughlin. Old Wesley were now playing with a new confidence and a penalty by Barry McLoughlin was followed by a good try scored by Richard Jermyn converted by McLoughlin.

A very exciting last 20 minutes followed. Gavin Telford scored a try and the conversion attempt drifted just wide. With 10 minutes to go Ian Cassidy scored and McLoughlin again added the points. Despite their best efforts in the final stages Old Wesley were unable to get the extra points to win. Two league bonus points were earned which was a good result to come back from a deficit of 30 points at the start of the second half.