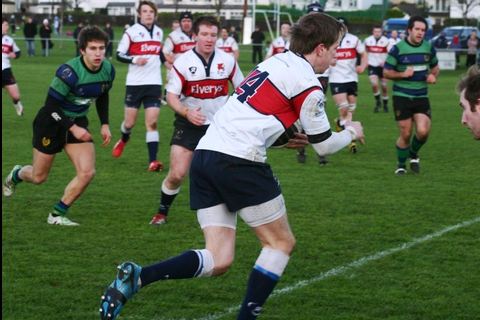 Anyone who has ever played or spectated at Kilboggit Park will remember it as a windy venue. It was no different for this, the first ever meeting between Old Wesley and Seapoint in the All Ireland League.

Old Wesley kicked off into the stiff breeze and for most of the first half were able to prevent the opposition from benefiting from the wind by denying them possession and retaining play in the Seapoint half. After 10 minutes Barry McLaughlin opened the scoring for Old Wesley with a well struck penalty kick keeping it low and hard into the wind. Ten minutes later Seapoint evened the score with a similar penalty the far end. Old Wesley looked the better side and their strong pack seemed to have the upper hand. Indeed the Wesley pack drove over the line, however the referee could not be sure of a grounding and did not award the try.

However, on 35 minutes Seapoint found the right gear when some indecision in the Wesley defence allowed them cross for the first try. Just three minutes later the hosts struck again when their winger set up an attack from within his own half resulting in them crossing the line again. Suddenly for Old Wesley a 17-3 half time score was a significantly more daunting deficit to recover from.

Wesley however had the ideal start to the second half. Within 2 minutes they brought play into the opposition 22 allowing the pack to drive over the line for a try by Wesley’s influential captain Tristan Goodbody. The Wesley pack grew in stature and were causing major problems for Seapoint and in turn keeping play in the opposition half. Stephen Harvey looked to be over for a second try but play was called back for a forward pass.

A Barry McLaughlin penalty brought the score to 17-13 with 20 minutes remaining. Then ten minutes later a high kick put the Seapoint defence under pressure bringing play deep into their 22. David O’Connor showed good hands with a pick up and pass to substitute John Carroll for Wesley’s second try. McLaughlin again nailed the conversion giving Wesley a 20-17 lead.  With 5 minutes to go McLaughlin struck again with an excellent penalty kick from the half way line achieving a highly skilful 5 out of 5 with the boot.

This win will give Old Wesley great confidence going into their final match before the mid season break against Terenure next Saturday.