At a pre- match function last Saturday, Old Wesley honoured the memory of one of its favourite sons, the late Professor Arthur Tanner, who died 2 years ago, by naming the club’s state of the art medical room as the “ Professor W. Arthur Tanner Medical Room”.

Arthur was one of the most popular and talented Medical Officers in Irish rugby  and his loss was deeply felt across the entire rugby family.

Arthur joined Old Wesley in the 1960s and featured on the club’s junior sides. In the late 1980s , he became our Chief Medical Officer. He continued in this role until 1996, when Leinster, recognising his talents, appointed him as their Chief Medical Officer; a role he performed with distinction for 18 years, also working with the Ireland Youths, Ireland A and the Ireland Senior Teams.

During his long career, Arthur treated hundreds of Old Wesley, Leinster, Ireland and Lions players and, whilst he was justifiably regarded as a great medic, he was equally highly regarded as a true friend .

Old Wesley President, Willie Campbell, who hosted the event, was delighted to be joined by Arthur’s wife Ann, and daughter Jocelyn, along with Philip Orr, immediate Past President IRFU. Ann made an excellent speech in acknowledging the occasion. 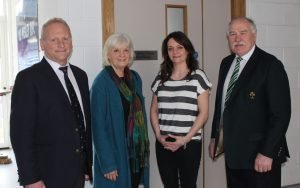