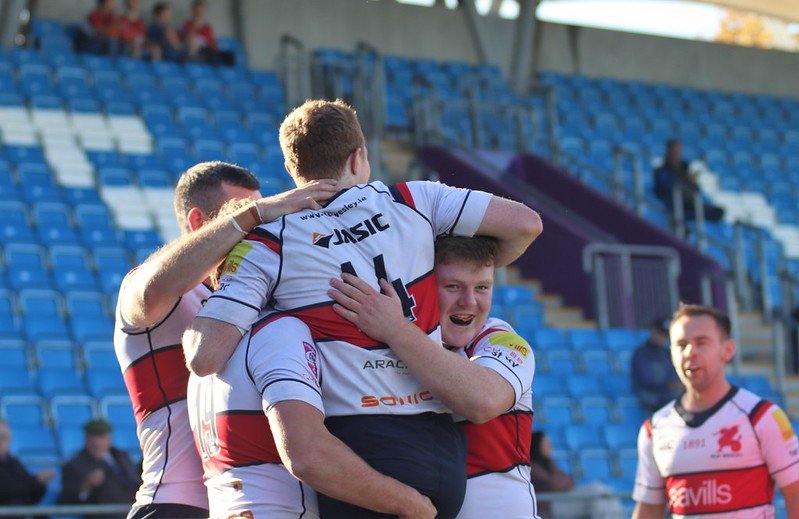 Old Wesley opened their new All Ireland League Division 1B season on Saturday in Energia Park, Donnybrook with an emphatic and impressive victory over old rivals, Naas, on a scoreline of 37-7, scoring 5 tries in the process.

With Naas having thwarted Wesley Division 1A ambitions last season, this was a great opportunity to get the new campaign off to a very positive start. Wesley were quick out of the traps and, within 1 minute, had scored a wonderful try in the corner by winger, David Poff, after a sweeping movement. Ian Cassidy, whose placekicking was excellent throughout , added the points with a great kick from the corner- 7-0 to Wesley.

Wesley continued on top, with debutant Josh O’Hare making an immediate impact , with some excellent line-out takes. However, some incisive attacking play (with Tommy O’Callaghan and Alex Molloy coming in as “ first receiver”) failed to breach the solid Naas defence.  The concession of a few penalties by Wesley gave Naas a foothold in the contest and, after Craig Ronaldson was wide with a penalty attempt on 14 minutes, the impressive no 8 Ryan Casey, stormed over for a try after a strong scrum. Ronaldson added the points to level the match at 7-7 after 18 minutes.

On 26 minutes , Wesley regained the lead with an excellent try – a neat break and inside pass by new scrum half, Keith Kavanagh, found Alex Molloy, who accelerated through the gap and left the final Naas defender for dead with a sublime sidestep to ground beside the posts, with Cassidy adding the points – Wesley 14-7. Wesley added to their tally before half time, after Naas received a slightly harsh yellow card, captain Iain McGann won a great line out and after a brilliant rollling maul, impressive hooker, Howard Noonan, who had a fine game, was on hand to ground for a try, with Cassidy again adding the points – Half time score Wesley 21-7.

The third quarter was closely contested, with the Wesley scrum performing very well — Cassidy missed a long range penalty and combative second row, Will Fay, went off injured after 54 minutes. Tommy O’ Callaghan, who was industrious throughout, had a great steal and turnover on 56 minutes and, soon after, Wesley ran a quick penalty and Reuben Pim crashed over in the corner for the bonus point try – Cassidy missed the conversion to leave the scoreline 26-7 to Wesley.

Wesley were now rampant and the pack dominated possession and finished the match much the stronger – Cassidy kept the scoreboard ticking over with 2 further penalties and the match closed with a 5th try by O’Callaghan after a break by Molloy. With the conversion missed, referee Keane Davison blew the final whistle – Full time score Old Wesley 37 Naas 7.

This is a very encouraging start to a long campaign and next up is a tricky- looking assignment away to Buccaneers next Saturday 8th October.

Summary of the game in 5 minutes here: