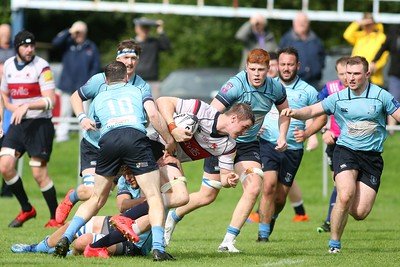 After a long wait, and even longer for spectators, Old Wesley returned to rugby today with a comfortable but hard fought win over MU Barnhall in the Leinster Senior Cup.  In a game that started in torrential rain and ended in sunshine Old Wesley were slow off the mark but grew in stature as the game went on.

Barnhall had the better of the opening exchanges, particularly in the penalty stakes. After just five minutes they crossed for a try in the corner with a move off the front of a line out.  They continued to pull the strings for much of the next ten minutes.  Wesley eventually earned a foothold in the opposition 22 and after a number of phases the ball went wide for Nathan Randles to score in the corner. With the pendulum now starting to swing in Wesley’s favour they grew more and more into the game.  However despite their territorial and possession advantage they could only manage two penalty goals for the remainder of the first half, leaving the score 11-5 in their favour at half time.

Old Wesley continued where they left off for much of the third quarter, but still no scores for either side were forthcoming.  The home side were dealt a blow with 15 minutes remaining when their number 7 received a yellow card for a deliberate knock on.  This seemed to spur the visitors into action.  From the ensuing penalty Wesley found touch inside the opposition 22. After a couple of phases the ball ended up on the wing with Tommy O’Callaghan who sprinted over 20 metres for a try in the corner. Shortly after, and following a scrum penalty, Wesley were again in the Barnhall 22.  This time it was the turn of the forwards as they mauled over the line with Stephen Boyle claiming the grounding.  The conversion by Josh Miller made it 23-5.

A late rally by the Kildare men threatened the Old Wesley line, however the defence held firm and there were no further scores.

Old Wesley now meet Lansdowne in the next round of the competition next Saturday 28th August.