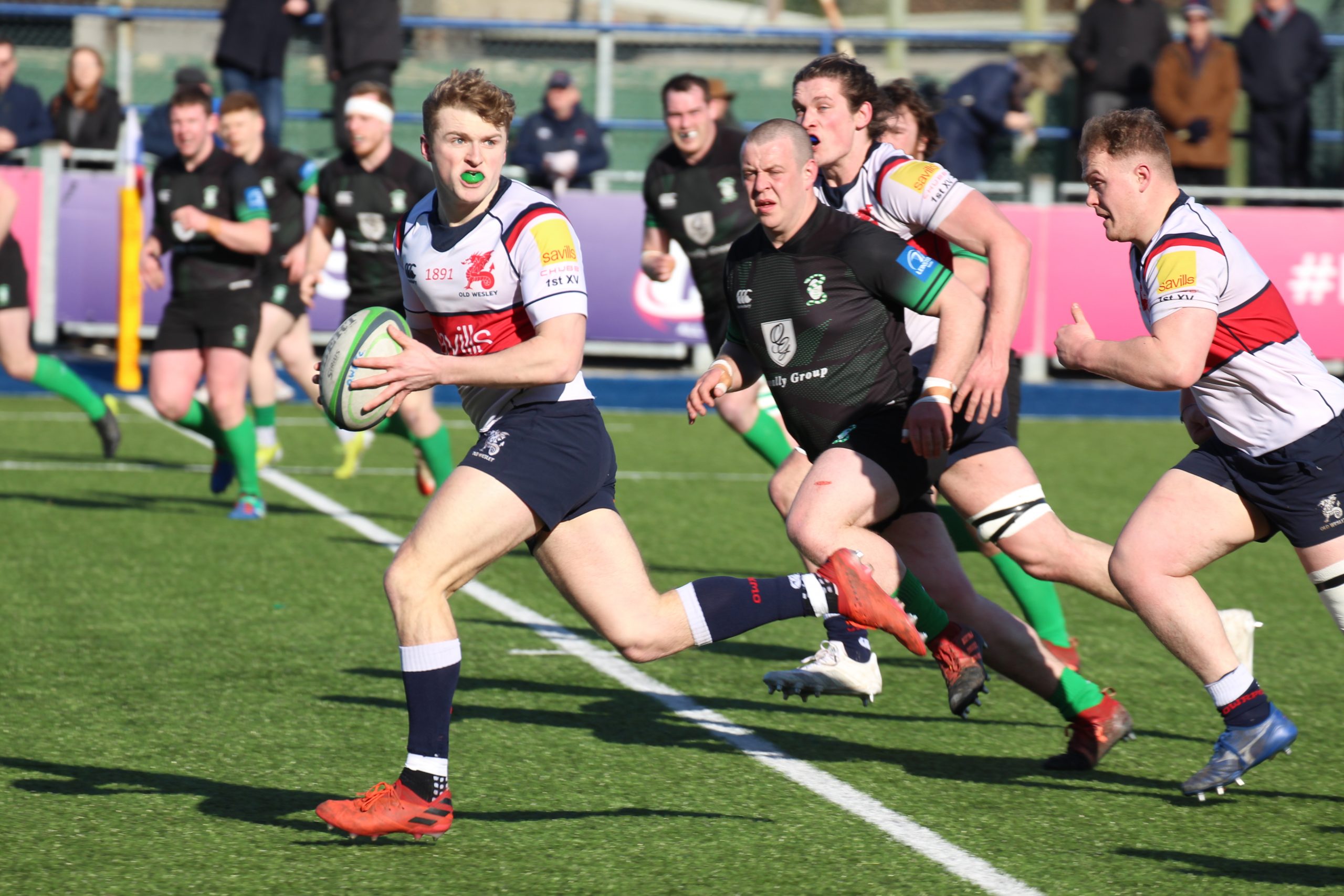 Matches between these two sides have always been keenly fought, and this one was no different.

Apart from an early Ian Cassidy penalty goal from 37 metres the first 15 minutes of the match showed no difference between the two sides with play kept within the two 22s. But after that Old Wesley started to make inroads.  An Alex Molloy break brought play inside the Naas 22 but Wesley conceded a penalty allowing the opposition to escape. Five minutes later Wesley were back up to the Naas 5 metre line but again denied a score due to a penalty.  Another Molloy break had Naas on the back foot, and this time they were penalised and shown a yellow card for cynical play.  Wesley opted for a kick to touch and after a number of good forward carries the ball went wide to Tommy O’Callaghan who crossed in the corner for the first try of the match.

Naas responded with a penalty kick to the Wesley 22 but were unable to capitalise. Wesley then got down the pitch again and O’Callaghan was nearly in for his second try. Molloy was then on hand again taking a pass and scything through the opposition defence to score under the posts.  Ian Cassidy converted for a healthy 15 nil lead.

With 35 minutes gone a speculative Naas kick down the pitch was chased and kicked ahead by Fionn Higgins, who went on win the race to ground the ball for the opposition’s first try, converted by Peter Osborne.  But that was not it.  A high tackle by Paulie Tolofua saw Naas dealt a second yellow card.   Wesley kicked down the line for a line out 10 metres from the goal line.  It wasn’t the best of line outs however Reuben Pim was able to collect a loose ball and run in unopposed for a try under the posts.  Cassidy converted with ease for a 22-7 half time lead.

Old Wesley started the second half where they left off maintaining a spell of continuous pressure and after 6 minutes James O’Donovan took a pass 20 metres out and with Naas defence short, had an easy run in for the fourth and bonus point try. Wesley continued the pressure and looked to have Naas on the back foot.  However suddenly the Kildare men broke away and ended up securing a line out 10 metres from the Wesley line. Off the line out they went over for their second try, by Tolofua,

This spurred on the visitors and Wesley, with their bench now virtually emptied, seemed to lose a bit of concentration. With 20 minutes to go Naas looked to be over again only to be held up.  But shortly after Osborne crossed and converted his own try to cut the Wesley lead to 10 points. Another penalty had Naas back inside the Wesley 22. But the threat of a try was lifted after they conceded a penalty.

Wesley needed to steady the ship, and this they did, weathering the remainder of the Naas storm.  A penalty kick to touch had Naas back inside their own 22, and whilst they had much of the possession for the final few minutes they could not break out of their own half. With the final whistle Old Wesley had claimed their third bonus point win in a row.

After the match Old Wesley captain Iain McGann was presented with the Stephen Mooney memorial trophy.  The win also means that Old Wesley are guaranteed a home semi-final in the promotion play offs.

There is now a 3 week break before the final round of matches in the competition, starting with an away trip to Navan.