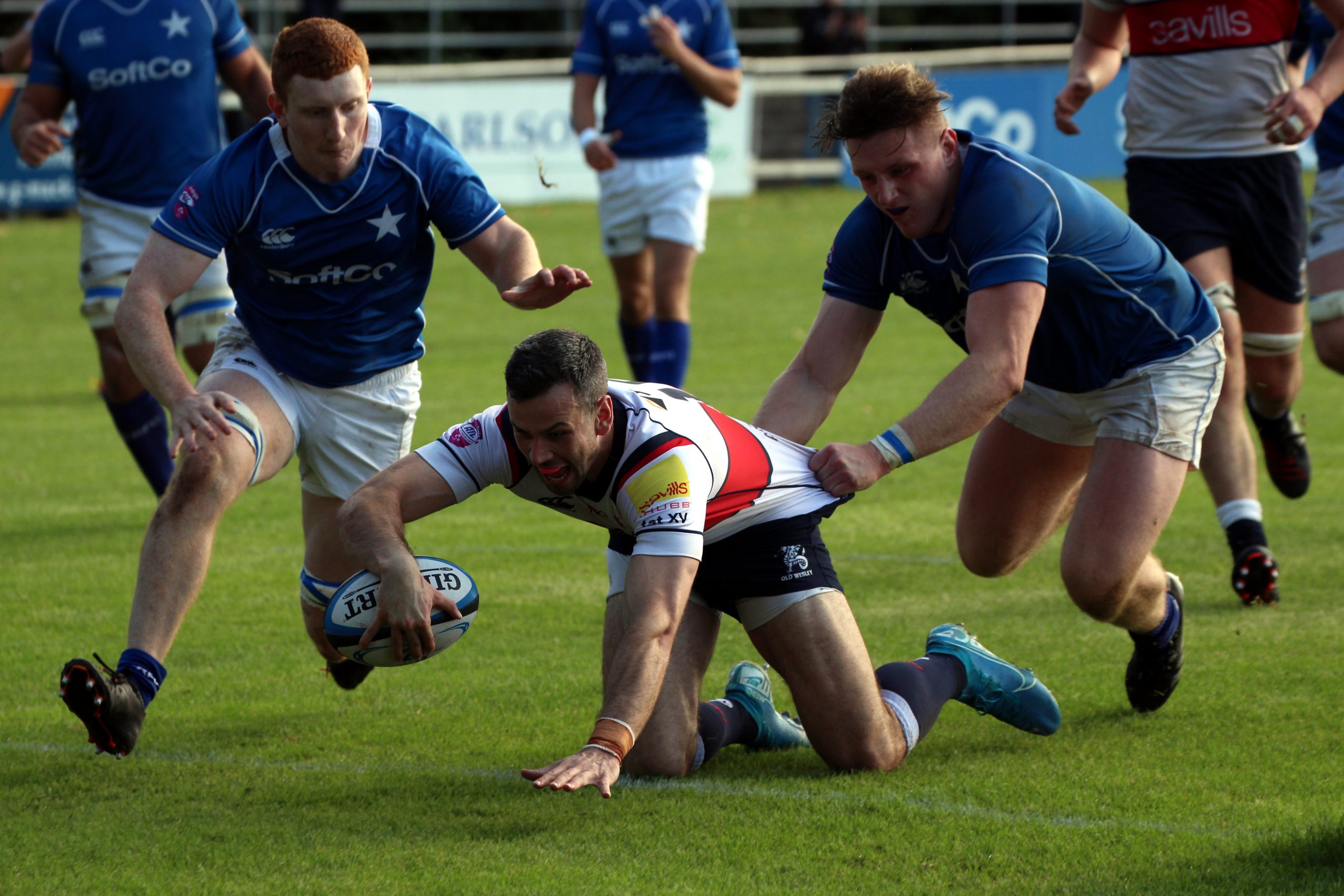 For the second week in a row Old Wesley came out on top, once again against a former Division 1 champion.

Played in ideal conditions St. Mary’s made the early running putting the Wesley defence under pressure, and after just 4 minutes the home side was rewarded with a kickable penalty which Conor Dean slotted with relative ease.  It was 10 minutes before Wesley got a foothold in the opposition 22 however the visit proved fruitless on the scoreboard.  A yellow card for the home team winger Mark Fogarty allowed Wesley to kick and find touch inside the Mary’s 22, but once again their defence held firm.

Old Wesley eventually got on the scoreboard with a Josh Miller penalty goal shortly after the water break.  Dean struck again after 32 minutes and shortly after Miller levelled the score with a particularly well struck penalty kick from 45 metres out.  This left the score at 6 all at the half time break.

Wesley had a better start to the second half pinning the opposition in their own 22 following a penalty kick to touch.  There were good carries and when a Mary’s clearance kick was blocked down their supports gasped; but still no try.  However from their next salvo the pressure paid off.  A break by David Poff and a neat pass to James O’Donovan and he was in under the posts for the first try of the match.  Miller converted with ease.  After 10 minutes of the second half a serious ankle injury to St. Mary’s substitute Hugo Conway, who was only on the pitch a few minutes, caused the match to be stopped for 20 minutes as he received treatment on the pitch.  We wish Hugo a speedy recovery.

After resumption it was the home side’s turn to apply pressure as they secured a line out 15 metres from the Wesley goal line.  Then a yellow card to Ben Burns reduced the Wesley numbers to 14.  The penalty kick under the posts was eschewed by Mary’s who bravely opted for a scrum.  And it paid off when they powered over for a try, mid way between the goal posts and touchline, by Mark Fogarty.  Dean added the points bringing the sides level at 17 all.  But Wesley struck back almost immediately.  A cross kick to the right wing had the Mary’s defence under pressure and following some big carries JJ O’Dea had the honour of grounding for Wesley’s second try, despite being still down to 14 players.  Miller again converted with confidence.

Now getting into the business of the game St. Mary’s started to pile on the coals. With 9 minutes remaining a penalty kick to touch earned them a line out 10 metres from the Wesley goal line.  They maintained the pressure and succeeded in mauling over the line for a try in the corner by Richard Halpin.  But this time, and for the first time in the match, Dean was slightly off target with the conversion leaving Wesley 2 points ahead.  A nervous last few minutes saw Mary’s continue the assault and following some powerful carries they got back into the Wesley 22 but just 15 metres from the line they conceded a penalty.  With time now up Miller kicked the ball dead much to the relief of the Wesley supporters.

The result promotes Old Wesley to 3rd in the league, but crucially with 2 wins out of 2 against rated opposition.