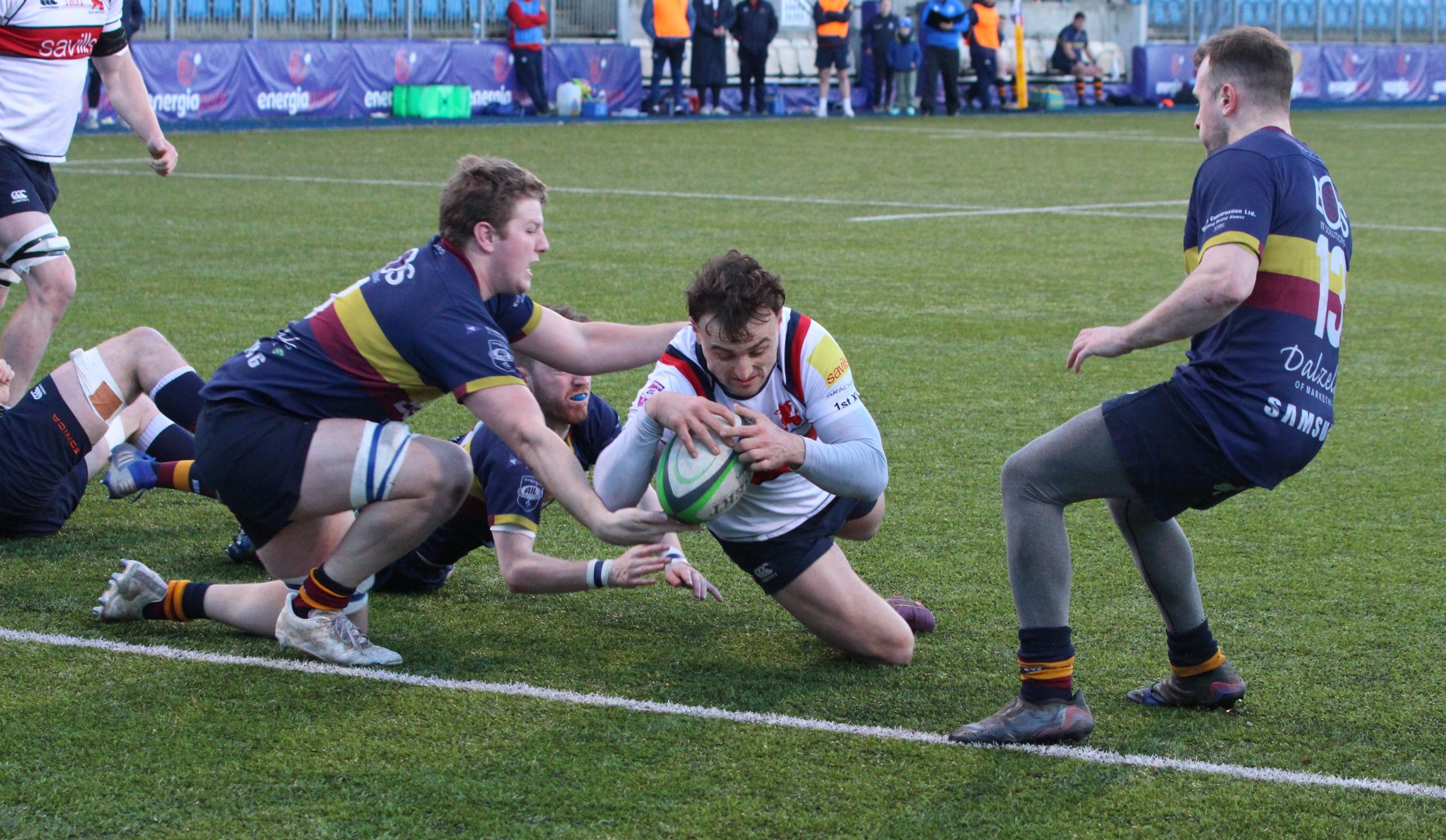 For the second time in just 7 days Old Wesley and Banbridge met in the All Ireland League, and from an Old Wesley point of view it was another fruitful result.

Old Wesley were off the mark promptly after a break from his own half by James O’Donovan brought play into opposition territory with the ball eventually making its way to the ever-exciting Alex Molloy who crossed under the posts for a try.  Josh Miller converted with ease.  Banbridge spent much of the next 10-12 minutes in the Wesley half but failed to convert their territorial advantage into points. Then it was Wesley’s turn to attack but despite having a couple of 5 metre line outs they also failed to change the scoreboard.

The break for Old Wesley came when Will Fay broke a couple of tackles near the half way line and found himself in the clear.  He went off on one of his familiar thundering runs where he was eventually taken down 5 metres from the line.  But Cronan Gleeson was on hand to cross for the try.  Miller again converted with ease.  But the visitors responded immediately.  Two minutes later they kicked a penalty to touch earning themselves a 5-metre line out.  After a clean line out take, they mauled and drove over the line for their first try, scored by Peter Cromie and converted by James Humphries.

Five minutes later the home side was in trouble again with Banbridge benefiting from a couple of 5-meter line outs.  They drove over again but the ball was held up and Wesley escaped. Banbridge continued the assault but when they knocked on the referee blew for half time. 14-7 to Old Wesley

Wesley started the second half like they did the first.  After just three minutes a break by Molloy had the opposition on the back foot.  He passed to Tommy O’Callaghan who had to use all his speed, agility and strength to fend off a couple of tackles before scoring ten metres in from touch. Miller converted again. After ten minutes Wesley had the opposition in deep trouble forcing them to concede a number of penalties, eventually resulting in a yellow card for their tighthead prop Michael Cromie.  With the cards now stacked in Wesley’s favour another try was imminent and sure enough a couple of minutes later Keith Kavanagh pounced to score off the back of a ruck for the bonus point try, again converted by Miller.

Some neat passing between O’Donovan and David Motyer nearly saw the later claim another try.  He was stopped short but Banbridge conceded a penalty.  A quick tap by O’Donovan got him over the line but he was unable to ground the ball. The Ulstermen eventually relieved the pressure and made their way down field when it was Wesley’s turn to infringe and concede penalties. With persistent penalties Sam Kenny was shown yellow, taking one for the team.  Banbridge capitalised and eventually had a line out near the Wesley line.  This time they swung the ball wide with a classic back line move resulting in a try out wide by Conor Field.

Banbridge, now with their tails up, continued their attacking with some late rallies.  But Wesley weathered the storm and after the visitors conceded a penalty the ball was kicked to touch for full time.

The win leaves Old Wesley 5th on the league table separated only by points difference from the 3rd and 4th place teams.