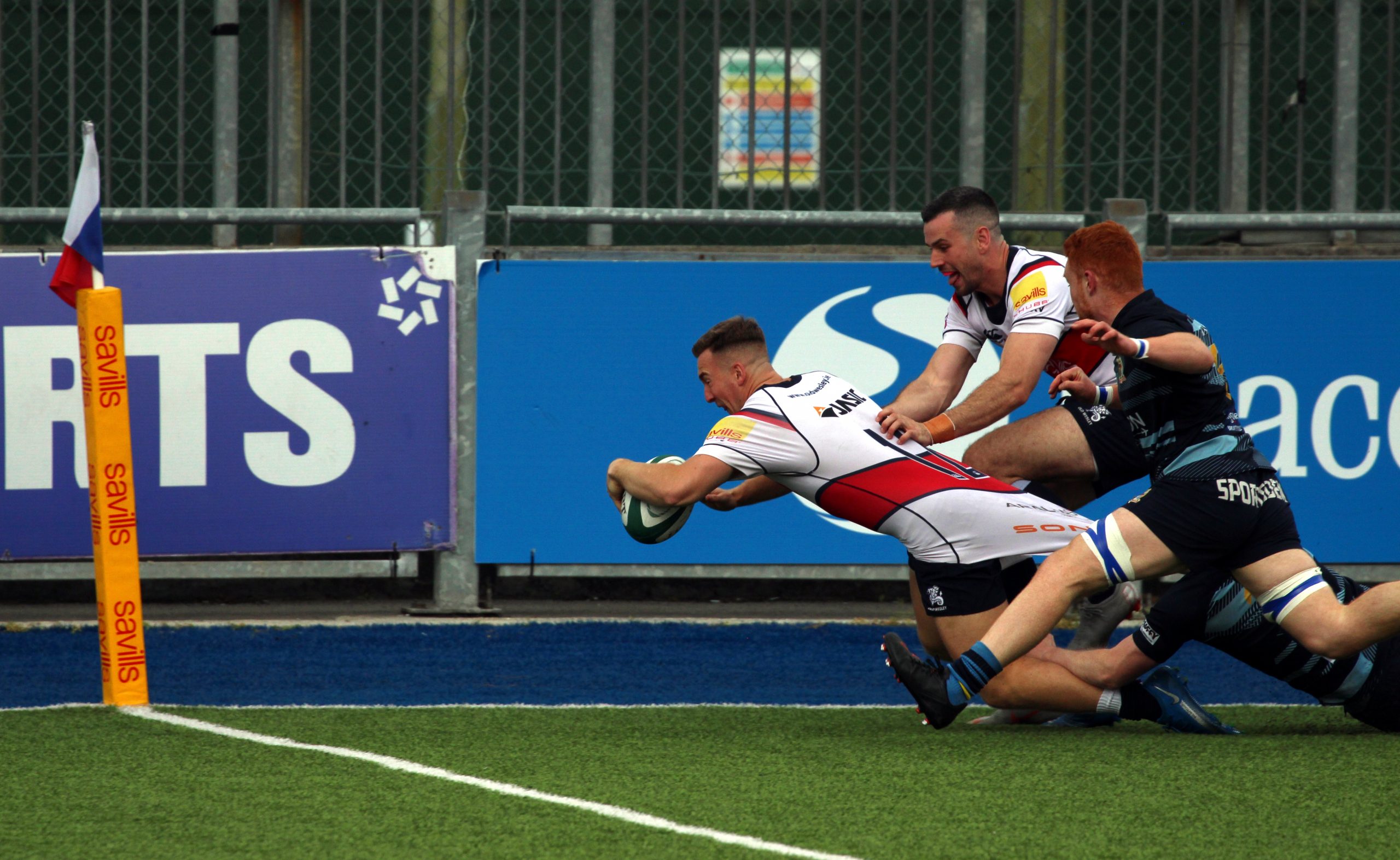 Old Wesley claimed a comprehensive 7 try bonus point win over Navan in round 3 of the All Ireland League.  The win promotes Old Wesley to 2nd in the Division 1B Table.

Right from the outset it was clear that Old Wesley was seeking nothing short of a bonus point win in this, the 3rd match of the AIL competition.  This was evidenced when Wesley were awarded a kickable penalty after 2 minutes, but elected to kick down the line.  The gamble paid off, when just 3 minutes into the game and after some accurate ball handling, David Poff crossed in the corner for a try.  Wesley continued the dominance and soon had another line out deep in the opposition 22.  A knock on looked like the opportunity was gone, but when Navan failed to control scrum ball near their own line, Alastair Hoban pounced on a loose ball and literally fell over the line for try number 2.  This time Josh Miller converted for a 12 nil lead, and the opposition had hardly touched the ball.

After 15 minutes Navan eventually claimed some Old Wesley territory and tried to put together some attacking moves.  However the most they could achieve was a missed penalty kick.  Their woes were added to mid way through the first half when their number 8, Hardus van Eeden, was yellow carded for a dangerous tackle.  Sure enough Wesley were soon back bombarding the visitors defence, and with 27 minutes on the clock, Iain McGann received a pass 10 metres from their goal line and had no difficulty in shrugging off a couple of tackles to cross for the 3rd try.  Miller again converted to make it 19 nil.  Approaching half time Ian Cassidy made a neat break off a maul gaining 15 metres but it came to nothing.  Then Navan had another chance to get off the mark with a penalty 40 metres out.  They kicked to touch but again nothing further came of it, leaving Old Wesley with a healthy 19 nil lead at half time.

Navan started the 2nd half with gusto, but just couldn’t breach the Wesley defence.  Eventually y a loose pass was kicked down field by Tommy O’Callaghan bringing Wesley back into the scoring zone.  After a number of phases the Navan defence was stretched and it was McGann again on hand to deliver a pass to Rob O’Donovan who crossed, with relative ease, to score the bonus point try under the posts.  If Navan were to have any chance they needed to score next, but the exact opposite happened.  A kick down the touchline and a defence mix up by the Meath men was capitalised on by the chasing Nathan Randles who dived on a loose ball for another try.  Cassidy converted from the touchline and the result was beyond doubt.  Wesley were now rampant and the visitors had no answer.  Shortly after the water break Charlie O’Regan scored try number 6 after receiving a pass and sprinting 20 metres unopposed to touch down under the posts.

With 10 minutes to go Navan eventually had their moment of glory crossing for a try by winger Paddy Fox which was converted by Mark Farrell. However it was only a consolation and Wesley had the last say.  With 80 minutes up, and after continued pressure the Navan defence was once again stretched.  The Wesley backs were queuing up to score and Conor Gaston strolled over for possibly one of the easiest tries he ever scored.

There is now a two week gap in the competition before Old Wesley meet old friends Naas in the next round of the league.