On an historic and memorable day for Old Wesley, which saw some 220 members and guests enjoy a pre-match lunch in the presence of An Taoiseach Enda Kenny T.D. before he cut the ribbon to officially open the Club’s magnificent new facility in Donnybrook.

An Taoiseach, who received a warm welcome and delivered a relaxed and enjoyable speech, joined the large crowd to witness the youngest member of the Club, Reuben Moran, lead out the Old Wesley team to take on Dolphin in the first home game in the Ulster Bank League in this the 125th anniversary for the Club.

Old Wesley started the game at a great pace and after just two minutes were awarded a penalty and Barry McLaughlin duly slotted it over for a 3pts to nil lead. From the kick-off again Wesley kept on the attack and after a strong run from Ian Cassidy were awarded another penalty just inside their own half. Rory Stynes found an excellent touch and from the resulting lineout Wesley brought Paul Harte in off the wing to split the Dolphin defence and touch down near the posts. McLaughlin again added the points with a simple conversion.

At this stage the big Dolphin pack began to put the Old Wesley scrum under pressure and were awarded a penalty which they went for touch and from the lineout continued to put on the pressure. This saw some fine running and support play which brought them close to the Old Wesley line before giving away a penalty and allowing Wesley to clear their lines. After this period of pressure a speculative kick deep into the Dolphin half and the Wesley backs were up quickly to make the tackle and from the ensuing ruck were awarded a penalty which again McLaughlin duly converted to give Old Wesley a 13-nil lead after 23 minutes of play.

From the restart Old Wesley gave away a penalty and from in front of the posts and some 35 metres out Cillian Monaghan completely miss hit his attempt. From the drop out Wesley brought play deep into the Dolphin 22 and a poor kick out of defence was fielded by Isaac Leota who made an excellent break, beating three tackles before drawing the defence and finding Harte, who ran in forhis second try of the game and his third in just the second league match of the season. McLaughlin missed the conversion from far out.

On 25 minutes Old Wesley No.8 Mark Rowley was forced to leave the field with an arm injury which saw the introduction of former Corinthians player Donnchadh Phelan. For the rest of the half the Dolphin pack took control and the Wesley defence was put under pressure, but when Dolphin did get close to the Wesley line they either gave away a penalty or knocked the ball on in the wet difficult conditions, leaving the score 18-nil at the break.

Dolphin started the second half where they left off, on the attack and were awarded a penalty in front of the posts which Monaghan converted. On ten minutes into the second half Old Wesley brought Kenny Knaggs into the fray which immediately saw an improvement in the scrum. Shortly after that Wesley’s Ian Cassidy, who had a fine game, was substituted by Adam Griggs and Craig Telford was substituted by promising young hooker Conor Maguire.  From this point on Wesley took control and put together some good continuity, which saw some good passing movements between forwards and backs with Stynes, whose fielding and positioning were out of the top draw throughout, Clifford, with some fine tactical kicking, Leota, Phelan, Horan and Griggs to the fore. Despite this, the handling proved difficult due to the conditions and the ball was spilt on a number of occasion close to the line. The only reward for all the pressure was a penalty in the 56th minute again by Barry McLaughlin.

Deep into the final quarter of the game Davy Henshaw was sinbinned and Dolphin went on the attack. On two occasions they opened the Wesley defence only to be called back for a double infringement and awarded a penalty. However, in the final play of the game, they were rewarded with a fine try by Barry Fitzgerald which was converted by full back Barry Keeshan to close the scoring at 21-10.

This win puts Old Wesley into second place, on points difference, at this early stage of the competition and next week we roll on to Limerick for a clash with league leaders ULBohemians.

The day got even better when the 2nds came back from a 15-6 deficit to beat Old Belvedere 18-15, with two excellent second half tries, in the Leinster league Division 1 and the 5th won in Coolmine by 24-7 getting their league campaign off to a great start. 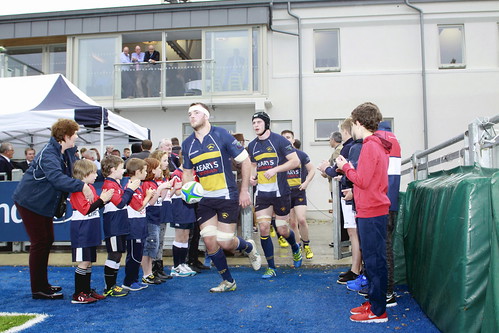