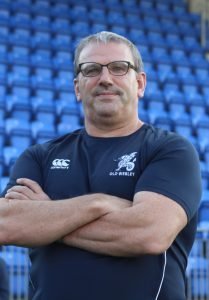 Old Wesley’s Director of Junior Rugby, Stuart Kinlan was yesterday inducted into the Leinster Branch Junior Rugby Hall of Fame.  This is a huge honour for Stuart and of course for Old Wesley.  For Old Wesley members it is not hard to see why Stuart is worthy of this honour, but for the record here is the reason why.

The nomination of Stuart Kinlan for the Leinster Junior Rugby Sean O’Brien Hall of Fame Award is made in recognition of a successful playing career at senior and junior levels over a period of 25 years, his role as a successful coach and manager of junior sides and, in particular, a remarkable job performed, and continuing as Director of Junior Rugby.

Stuart was born into a family steeped in the Old Wesley rugby tradition.  His father, Willie, played on the wing on the 1XV for many years. His brother Mark, a feisty flanker, played for the 1st XV as well as several junior sides. He later went on to become a senior coach with the Club.

Stuart attended Mount Temple Comprehensive School and represented the school side as a loose head prop. He joined Old Wesley in the 1990/1991 season gaining his place on the Under 19 XV. His playing career continued uninterrupted for 25 seasons up to March 2016, and during that time he represented every team in the Club.

Stuart’s contribution to Old Wesley has been immense and can be summarised as follows:

Following his Under 19 exploits Stuart moved into the junior sides and was part of the record breaking ‘Killer Bs” who went through the season with 100% record in 1992/93, winning their league and the Winters Cup. He gradually moved up the teams and was part of the Old Wesley senior squad for 5 seasons playing in the AIL Divisions 1 and 2 before returning to play down the junior sides.  He gained further cup and league honours (8 playing medals in total) and captained the Junior 2 XV for two seasons.

As the curtains began to draw on Stuart’s playing career, he moved into a player-coach role with the Club’s Junior 2 and 3 sides winning the O’Connell Cup in 2011. Following his final game, ironically against the BFG Ravens in Mount Temple (where he had started his rugby career), Stuart took over as successful manager of the Junior 3 XV, winning 5 league titles.

In 2013 Old Wesley created a new post of Director of Junior Rugby with the remit of overseeing the organisation and expansion of rugby below senior level in the Club. Stuart was appointed as the obvious choice, and immediately took to the role with immense energy, enthusiasm and expertise, leading to the following unprecedented successes over the past 6 years:

As of today, Old Wesley junior teams compete in Metro 1, 2, 4 and 5 – higher than any other club in Leinster, and this stands as testimony to the time, effort, enthusiasm and expertise applied by Stuart to his role.

Stuart was deservedly awarded the Old Wesley ‘Danny O’Grady Cup’ as “Clubman of the Year” in recognition of his work at junior level.

Stuart started and successfully runs the Club Shop taking on the responsibility of ordering and purchasing merchandise, and liaising with kit suppliers.

Being an amicable and sociable soul, he is also well known for liaising with Arthur Guinness in the Club bar on a regular basis.

Stuart was presented with an award at a function at the 4 Seasons hotel; see photos below 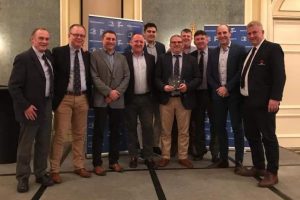 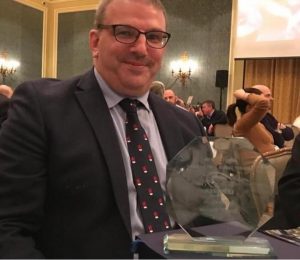 Others inducted into the Hall of Fame Leinster Junior Rugby were: