The Battle of the Bull, report by Guy Creswell

This was a big one, a battle of epic proportions. Wesley, undefeated this season, imperious atop their throne; Clontarf, the usurper, attempting to dislodge the rulers from the dizzying heights of the top of the table.

Wesley exploded out of the blocks; an indefatigable red wave that threatened to overwhelm the Clontarf defence from the get-go. Heavy, barnstorming runs from David “incognito-tab”. Heelan set the tone and put Wesley on the front foot, and a series of half-breaks and strong runs were only just let down by the execution of the final pass. However, morale was high. Camped in the opposition 22, the cries for patience and calm thinking was somewhat diminished by the shrill shrieks omitting from Max-the-pain-train-Lane informing his opponents that he would in fact be enforcing himself “All day baby, all day!” The men of the Bull were seen to take a collective ‘gulp’ at such a sentiment.

Stevie-“forever”-Young pulled the strings with hands as silky as a silkworm’s hands, releasing the ever-willing and forever angry Sam Moore to exact his barely controlled fury upon the opposition backline. Not to be outdone, the Wesley backline provided strong running through centres Michael Glynn and Graham Claxton who gave more forward momentum.

However, despite sustained pressure and some close shaves, the Clontarf whitewash remained uncrossed. Against the run of play, Wesley conceded a penalty, to make it 3-0.  But this was instantly nullified as a Clontarf infringement directly in front of the posts and the kick was converted by Andrew “always-puts-his-boxers-on-last” Handcock, making it 3-3. This was to be the extent of the scoring as both teams parted for halftime. Clontarf were proving a tough nut to crack, and it was clear that Wesley had a war on their hands. As the huddle formed around Weapon and Brian, wild, animalistic cries were heard from the sideline, where Al O’Connor had started his traditional war dance, working himself up into a blood frenzy in preparation for his entrance into the fray. Game on.

The second half battle picked up where the first had left off. Bone met muscle as the Bull and the Wyvern continued to wrestle for dominance. However, cracks were showing as both teams began to tire. A solid Wesley scrum in the centre of the park saw a perfectly executed backline move pay off, as Willie and Claxton passed and looped, before releasing Handcock steaming on a line as hard as O’Connor’s upbringing to touch down and subsequently convert, to make it 10-3 Wesley. Miles and miles away, somewhere safe and warm on the Southside, coach Clatch got a warm fuzzy feeling in his belly.

But with a dogged determination, Clontarf fought back. After attacking with intent, an overlap was created and they crossed over in the corner for 5 points. The conversion was missed; 10-8 to Wesley. Time for some reinforcements.

Five hours previous to this, lying on his sick bed, quietly humming “Happy Birthday to me” with what felt like his last dying breath, Chris Coghlan, the Pete Weber of the Metro Division 5, thought that this could be the end. But Wesley men don’t die quietly. After some customary Beastie Boys pump up time, the Old Wesley fullback arose, collected his team mates, crossed the Liffey, put on the jersey, came on, dinked to the corner, collected from a lineout, scored a try, and celebrated with a weary shout. It is on the backs of such heroes that the foundations for great teams are laid. 15-8 to Wesley.

Blood pumping, Wesley attacked again. Glynn, barrelled through the gainline, breaking free, and then stalling and swerving expertly to gain support, which came in the form of Andy “Give them no respect whatsoever” Kelly, who selflessly offloaded to Claxton on the 5 metre to touchdown. 20-8 Wesley. Clontarf responded with gusto, attacking out wide, gaining a slightly fortuitous bounce of the ball which set their winger free. 5 points seemed inevitable as he streaked towards the line in space. “Try time baby” the Northsider surely thought. But wait… “what’s that I smell..?” An overpowering aroma of West Coast Supermacs and Lynx Africa came hurtling out of the darkness with a blood-curdling scream, to scythe through the hapless would-be try scorer on the Wesley 22.   Al “the Dark Knight” O’Connor was sent directly to the bin, for what was deemed a high tackle.

Still in good position, the large Clontarf pack asserted themselves on the Wesley 5 metre, eventually burrowing over to make the score 20-13. With 5 minutes left on the clock, the two teams threw themselves at each other with renewed fervour, one throwing everything into attack, the other absorbing everything in defence. After some intense phase play, and a quick head stomp by Handcock on Guy “The little engine that could” Cresswell, there was a final assault on the Wesley defence. With a reluctant sigh to himself, Joe Wheatley decided to win a turnover, leaving it up to Willie Wood and his abnormally large quads to kick the ball out of play. Final score: Wesley 20, Clontarf 13.

Exhausted and relieved, the battle won, the men retired to the clubhouse swapping war stories and tall tales about rucks never hit and tackles never made. The journey continues……. 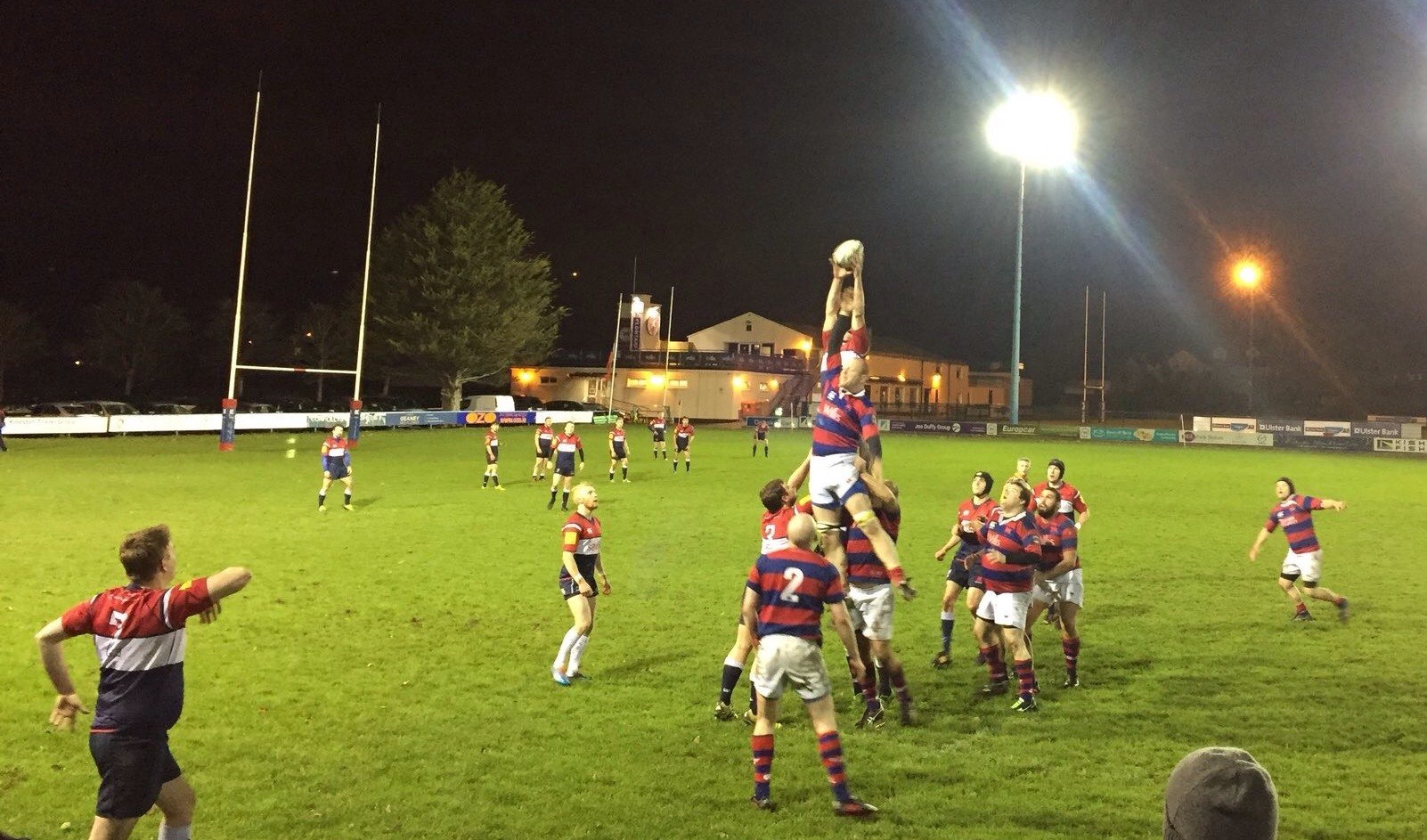