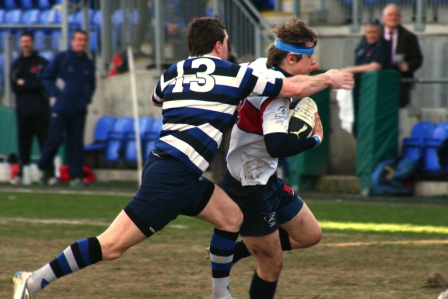 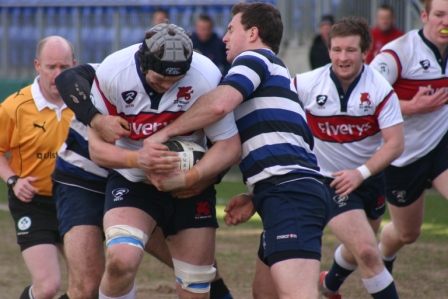 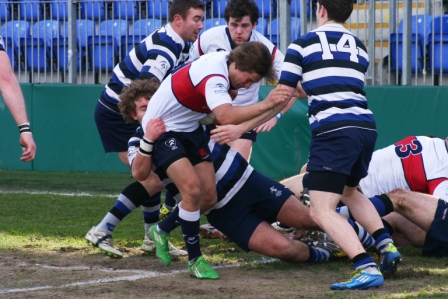 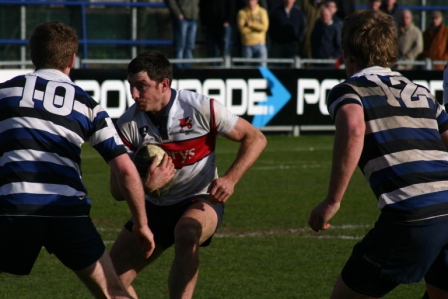 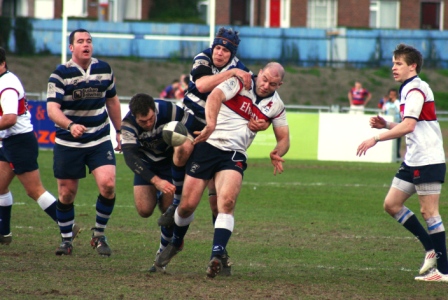 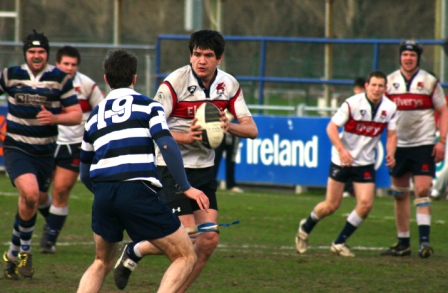 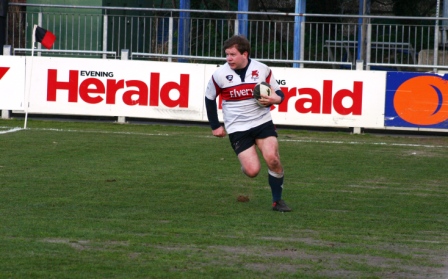 A great day at Old Wesley; Past Presidents & Captains Lunch, Tour Reunion, Ladies Day, Great Lunch, Elvis Night. Unfortunately the most important thing didn’t go right – the result, as Old Wesley tumbled to their 5th loss in a row, this time against Corinthians.

Played in ideal springtime conditions Old Wesley hosted Corinthians from Galway in this round of the Ulster Bank League. The home side looked the better team in the opening stages of the match and for the first ten minutes spent much of the time in the opponent’s 22.  However they were unable to breech the visitors’ stout defence coming away just 3 points from a penalty taken by Barry McLoughlin after 9 minutes.  But moments later Corinthians, on their first visit inside the Old Wesley half, equalised with an easy penalty when Old Wesley were caught offside.  The next 15 minutes were fairly even with both sides looking to run the ball and equally defend well. None more so than Greg Jacob, on his first outing for Wesley following a long spell of injury, who put in some hard tackles. However the home side were dealt a blow after 25 minutes when John Southern was shown a yellow card for a dangerous tackle.  The visitors immediately capitalised when they stretched the Old Wesley defence to score the first try of the match.

As the half time mark approached Barry McLoughlin made a fine break down the right wing feeding to Richie Jermyn who was dangerously tackled on the 22.  From the penalty Wesley chose to opt for touch.  From the ensuing line out on the 5 meter mark Old Wesley did drive over but were unable to ground the ball before the ref blew for half time, the score 3-8

The second half saw the Connacht men raise their game as the Old Wesley pack started to feel the strain. Just 4 minutes in and following sustained pressure they crossed for their second try, this time under the posts. To their credit Wesley fought back but were unable to convert their possession into points. Then Corinthians were awarded a penalty on the Wesley 22. Sensing the early possibility of a bonus point they opted for touch. From the ensuing line out they scored their third try from a classic peel from the back of the lineout.

Old Wesley’s hopes were rekindled with 15 minutes to go when Colin Wallace crossed for a try following some very good ball handling. McLoughlin’s successful conversion brought the score to 10-20. Both sides were now seeking a bonus point, albeit of different types. However the Old Wesley scrum was creaking and the backs starting to tire and it was Corinthians who achieved their target by scoring their fourth try right on the final whistle.