Donnybrook (the combined Bective and Old Wesley U15s) won their Round 1 Metro Cup Match yesterday v St Mary’s 29-17. It was easily the best performance by the team this season and was helped by two U14s players, MILO CAMPBELL and SHANE PEDLOW, who played up a level. 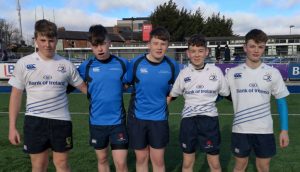 Five Old Wesley players from the Donnybrook U15s team made it to the final U15s Leinster trial, see photo above. From left to right they are: DANIEL RIGNEY (Back Row), BEN GOULDSON (Centre), OSCAR HURLEY (Prop), RORY O’KANE (Full Back) and THADY O’DONOVAN (Back Row / Prop!). Well done to all five lads for making it to the 3rd trial and hopefully there is positive news when the final Leinster Metro U16 panel is selected for next year. There was a high standard on display all round.

Update – Congratulations to Daniel Rigney (Back Row) who made the final selection  for the U16’s Panel for Leinster Metro Squad for next season 2019/20 .

Four other players – Ben Gouldson, Oscar Hurley, Rory O’Kane and Thady O’Donovan made it to the 3rd trial but unfortunately were not selected.  There was a very high standard on display and  it was a great achievement by these players to get to the final selection.  Well done to all.