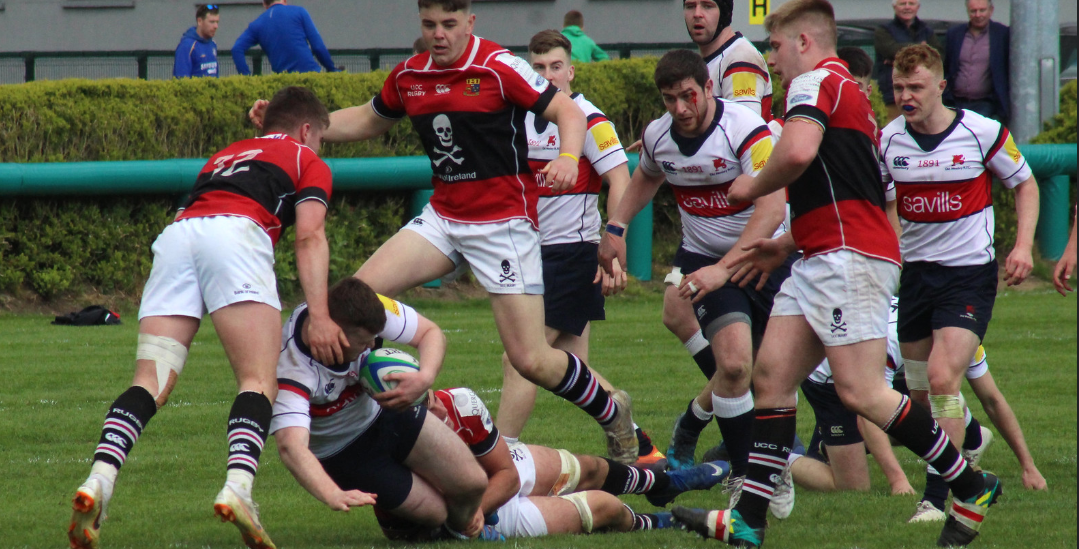 Old Wesley travelled to Cork for the final hurdle of their quest for promotion to AIL Division 1A but met a skilful college side that benefitted from the experience of having played against stronger opposition.

Played in perfect weather conditions, UCC were off the mark first with an early penalty goal 35 metres out in front of the posts kicked by James Taylor; an exciting young out-half who we will surely hear more about in the future. However from the restart the opposition failed to take possession and the ball was eagerly picked up by Conor Maguire, who made good yards. After a number of carries and recycles Paul Derham, himself a former UCC player, took the final pass to cross beside the posts for the first try of the match.  Rory Stynes converted for a 7-3 lead for Old Wesley. From the restart Wesley were soon back on the attack and through some good handling got play back into the UCC 22, before a forward pass ended their chances. The ensuing scrum was won by Wesley against the head but again, no score resulted.

UCC eventually regained some territory and after some skilful handling found a gap in the Old Wesley defence allowing scrum half John Poland to cross and score under the posts. Taylor converted with ease.  A typical Tom Kiersey break from the Wesley 22 brought play up to half way but it ended after knock on.  Then, soon after Captain Paul Harte looked to be clear of the defence only to be called back for a forward pass. But it was the Cork side who were on the scoreboard next with another Taylor penalty from under the posts.

A penalty for Old Wesley inside the UCC half was kicked down the line, but it failed to find touch, crucially allowing the opposition to clear their lines and avoid potentially conceding a try.  On 35 minutes Taylor slotted another penalty goal to create a two score lead. Wesley responded immediately with probably their best move of the day.  A line out 30 metres out saw the ball quickly moved across the back line in classic style. A brilliant Kiersey offload to David Poff who drew the defence with a dummy pass, then a pass to winger Tommy O’Callaghan who finished the move with a try in the corner. It looked like Wesley would carry a manageable 12-16 deficit into half time but there was a late killer blow to come. A UCC break down the wing caught out a few Wesley defenders and it took a last ditch tackle to prevent a try. However the ball was recycled quickly and swung across to the far wing for a try by Robert Hedderman.  All of a sudden the hill for Wesley to climb was now a mountain.

Despite the setback Wesley did have the livelier start to the second half and a yellow card for a high tackle by UCC’s Michael Clune on O’Callaghan renewed the interest. Down to 14 men the UCC pack was struggling and from a line out maul the pack was up to the opposition goal line. A powerful drive by Conor Barry got play over the line but the ball was deemed held up. From the ensuing scrum, UCC conceded a penalty. Wesley wisely opted for another scrum; again a penalty. Again a scrum but this time the referee awarded the penalty try narrowing the score to 19-23. From the kick off UCC were back on the attack and it took some desperate tackling to avoid conceding a try. However the cost was a penalty which Taylor again converted.  Taylor struck again just before the start of the final quarter to make it a 10 point lead for the Cork students.

Back to 15 players, UCC were now starting to stamp their authority on the game, and with Old Wesley possibly feeling the effects of the gruelling encounter against Naas 6 days earlier, the outcome was starting to look in the opposition’s favour.  A fine UCC break from midfield had play back into Wesley’s 22 and from the ensuing scrum their back line had the Wesley defence stretched leading to a try by Cian Bohane. Taylor again converted and now with a 17 point deficit there was no way back for Old Wesley. Any attempts by Wesley to attack were met with a brick wall defence and UCC wisely kept play in the Wesley half with accurate touchline kicks. To rub salt in the wound a mix up with the pass led to a loose ball kicked through by UCC.  Michael Clune outsprinted the Wesley defence, and controlled the ball perfectly for an opportunist try.

Despite the scoreline being way out of the reach of Old Wesley this gallant side fought to the bitter end and attacked from any scrap of possession they got. With the final whistle came a disappointing end to an otherwise wonderful season for Old Wesley. The team, to a man, together with the coaches and management must be complimented for their commitment and enthusiasm throughout the season.