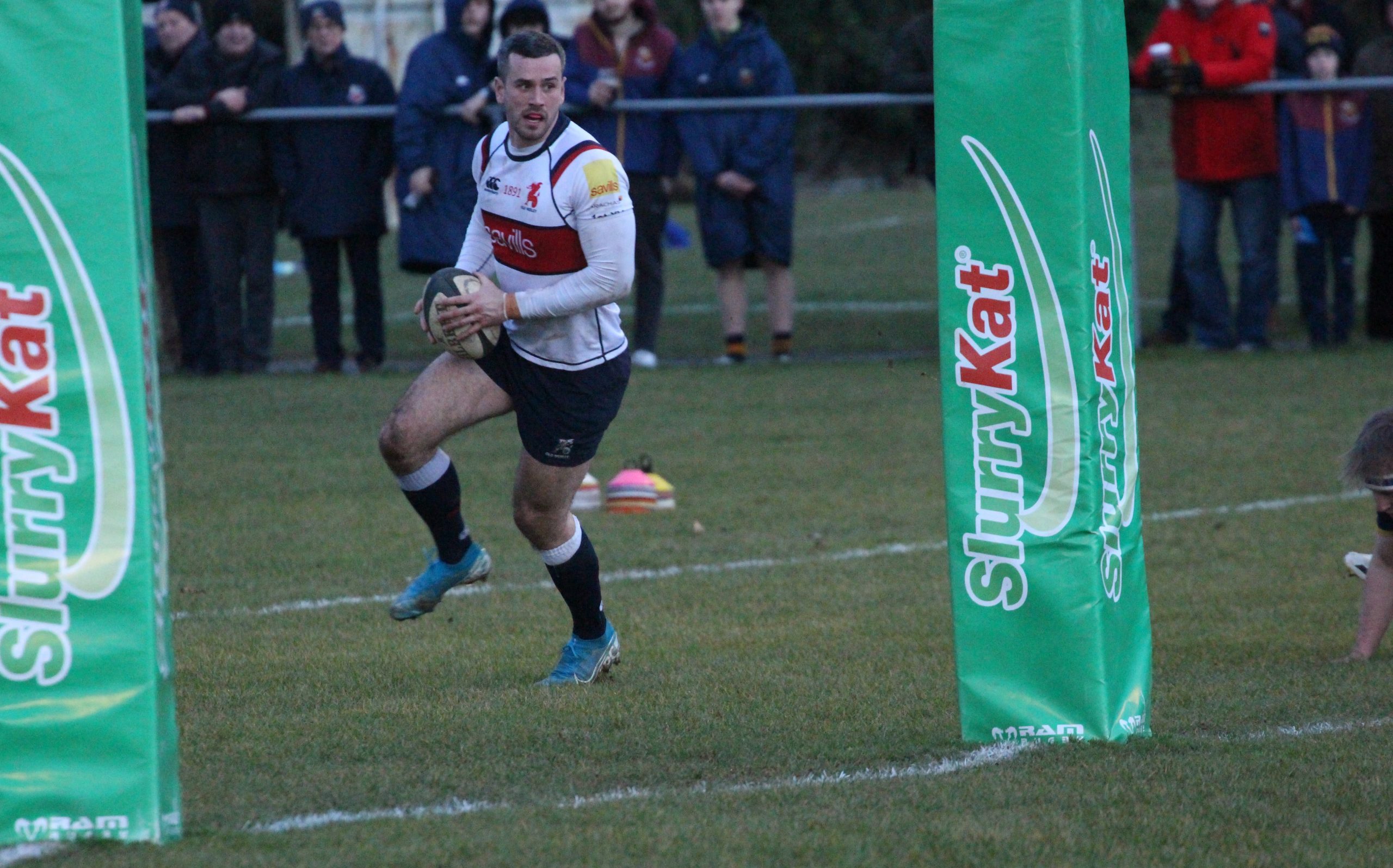 After two postponements this fixture eventually took place and for Old Wesley it was certainly worth the wait.

Right from the off Wesley showed their dominance and indeed for most of the first half they continued to do so.  An early break by Brian Short brought play into the Banbridge 22, and further good carries had play up to 5 metres from the line.  From a maul the ball was passed to the wing only for a Banbridge player to deliberately knock on.  This earned him a yellow card but the referee decided against a penalty try, despite there being two Wesley players in the clear outside him.  But from the penalty and line out Wesley continued the assault resulting in a try by Iain McGann. From the restart Wesley immediately continued the pressure with many players carrying to good effect, and within a few minutes they were on the scoreboard again with a try in the corner by Nathan Randles.  The difficult conversion by Josh Miller came back off the upright but Wesley deservedly led 10 nil.

On the quarter time mark, after a break from deep by Reuben Pim the ball was passed to the ever-elusive Alex Molloy.  Some neat interplay between Molloy and David Poff had the opposition totally confused before Molloy finished the move, crossing the line with ease for another try.  Miller converted and Wesley were showing they were in total control.  It was just 3 minutes before the next score, by James O’Donovan after he broke a couple of tackles to touch down under the posts for the bonus point try.  Five minutes later Molloy was showing his skills again with some exciting running.  He passed to Poff who ran 20 metres to touch down in the corner, however play was called back for a forward pass.  But it wasn’t long before Wesley were on the attack again.  After a penalty kick to touch, a five-metre line was taken cleanly and the ball fed out the line to Molloy who crossed for his second and Wesley’s fifth try.

After 38 minutes the home side eventually paid their first visit to the Wesley 22.  They applied some pressure but the defence held firm.  However Wesley were dealt a blow when Iain McGann was shown a yellow card for a high tackle.  From the ensuing penalty Banbridge looked like they would score a try in corner only for the ball to be knocked on.  Old Wesley escaped leaving the score at a healthy 31 nil at half time.

Whatever the Banbridge coach said to his side at half time should be bottled as they came out a totally different side.  Indeed the game went on to be a proverbial game of two halves.  It took under one minute for flanker Robin Sinton to score his side’s first try after finding a hole in the Wesley defence.  Now playing with the wind advantage the home side immediately upped their game and for much of the second half looked to be in charge. Ten minutes later Banbridge were over again this time with a try by Ross Cartmill.  It wasn’t long before they were on the scoresheet again, this time with a penalty try after the Old Wesley scrum buckled under pressure near their line.  31-19 and Wesley needed to steady the ship soon.  This they did as they started to reclaim some possession and territory.

The breakthrough came after 30 minutes of the half.  A couple of penalties saw Wesley bring play into the opposition 22.  Winning good quality possession, the ball went out the back line to Tommy O’Callaghan who showed great speed to get in for a try out wide.  Not deterred, from the restart the Ulstermen had Wesley conceding penalties eventually resulting in David Poff receiving a yellow card, for the team rather than for a personal offence.  From the resulting line out Banbridge showed their hunger again crossing for their bonus point try, by Robert Lyttle.  With four minutes to go Banbridge were still in search of the loser’s bonus point. They fought hard but the Wesley defence held out and after stealing an opposition line out the final whistle came soon after giving Old Wesley their second bonus point win of the campaign.

At the mid-point of the season Old Wesley lie 6th in the league, however there are just two points between 3rd and 6th in the division.