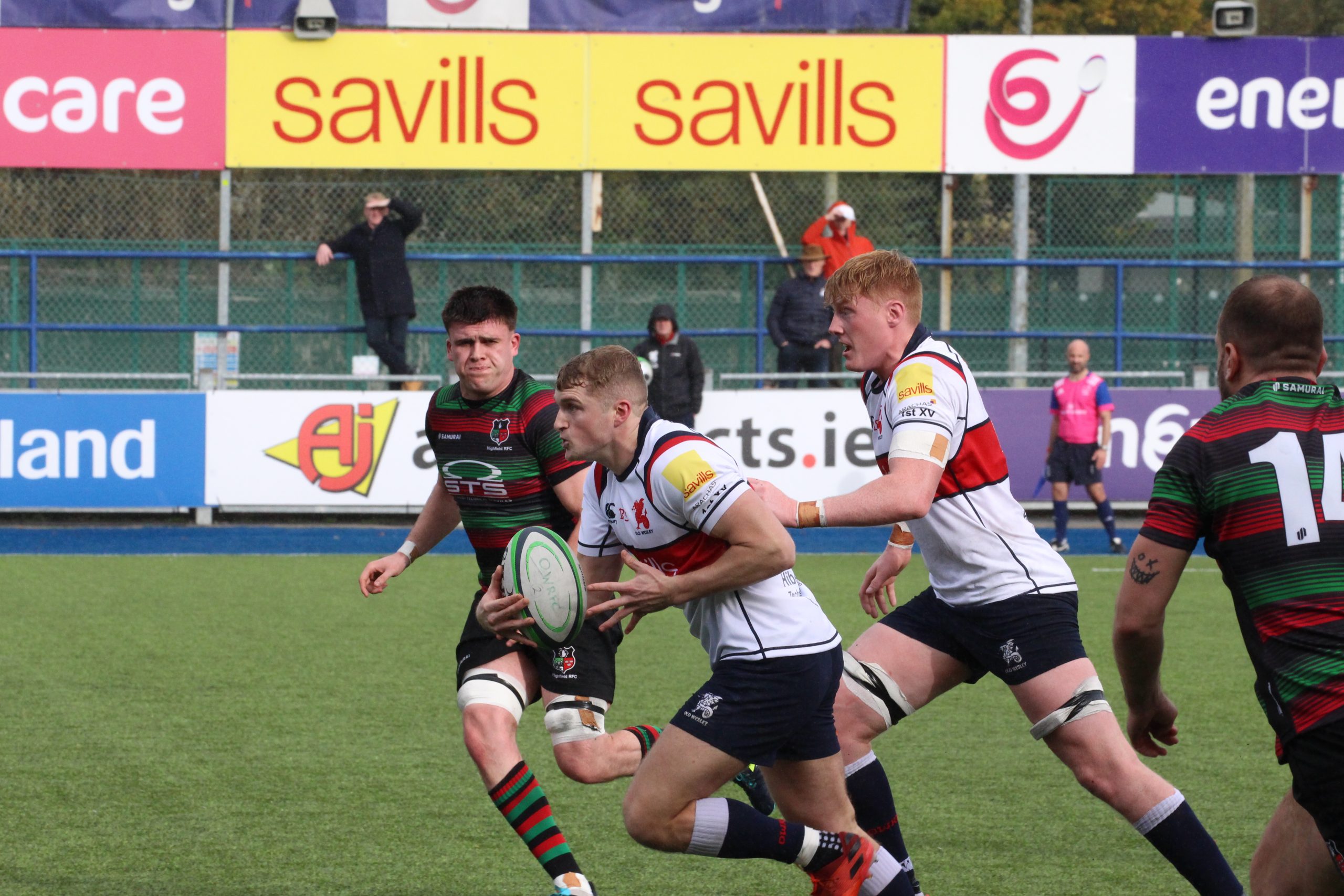 In this tight and low scoring game Old Wesley will count themselves a tad fortunate to come away with the result.  Highfield held most of the cards particularly in the first half and outplayed Old Wesley in most aspects of play.  However, despite this it was Wesley who held the lead for most of the first half, and emerged eventual winners.

Old Wesley actually opened the scoring after 3 minutes with an Ian Cassidy penalty goal from 30 metres out.  And soon after Alex Molloy very nearly succeeded with a 50/22 kick to touch which just hit the touchline.  But in between Highfield flexed their muscles; particularly in the scrum and line out.  In fact, they went on to steal a number of Wesley line outs.  After 9 minutes a Highfield penalty earned them a line out 10 metres from the Wesley goal line. A period of intense pressure followed and the Cork side were nearly over on a number of occasions.  However Old Wesley eventually escaped after the ball was held up over the line.

Living on scraps a typical Molloy mid field break opened the defence.  The pass went to David Poff who came within 3 metres of crossing for a Wesley try.  Highfield however continued to look strong, however the Wesley backs must be complimented for their fearless tackling.  A 47-metre penalty goal attempt by Cassidy had the length but was marginally wide.  30 minutes in and, in the words of the great Bill McLaren, there was an argy-bargy.  The ref spoke at length to both captains but no penalties ensued. A break by Highfield scrum half Richard Cassidy had Wesley on the back foot and it took stout defence to prevent a try.  Highfield maintained the momentum for a long spell, and they eventually breached the defence with a try by Travis Coomey.  Crucially the normally reliable James Taylor missed the conversion.  But right from the restart Molloy was on hand again taking play deep into opposition territory. Wesley continued the attack with Sam Pim crossing only to be held up from grounding and after 8 minutes of added time due injuries, etc the ref blew for half time and a 5-3 lead to Highfield.

The second half saw an improved Old Wesley and at the same time Highfield were guilty of conceding a large number of penalties.  The first of which was after 2 minutes allowing Cassidy to regain the lead with an accurate goal kick from 35 metres out.  Play then started going from end to end with both sides starting to run the ball more.  Highfield came very close to scoring with a run down the wing, but Cronan Gleeson, proving that props can run too, made a wonderful try saving tackle on the winger.  Minutes later they were nearly over again only to be guilty of a forward pass.  The Corkmen continued their attack but on each occasion came up short.

A 30-metre penalty kick by Cassidy frustratingly came back off the post but play remained in opposition territory. Wesley were them awarded a penalty 10 metres from the Highfield goal line.  Keith Kavanagh took a quick tap and Highfield’s captain David O’Connell couldn’t resist tackling him from an offside position, earning himself a yellow card.  Somewhat surprising Wesley opted for a scrum, refusing the almost definite 3 points. They attacked well off the scrum but Highfield won a turnover ending the chance.

A couple of penalties kicked to touch had Highfield back up to the Wesley 22. Then a brilliant line out steal by Sam Pim won possession back for Old Wesley before Highfield conceded another penalty.  With time now up the ball was kicked dead for full time, and the Wesley players and supporters breathed a sigh of relief.