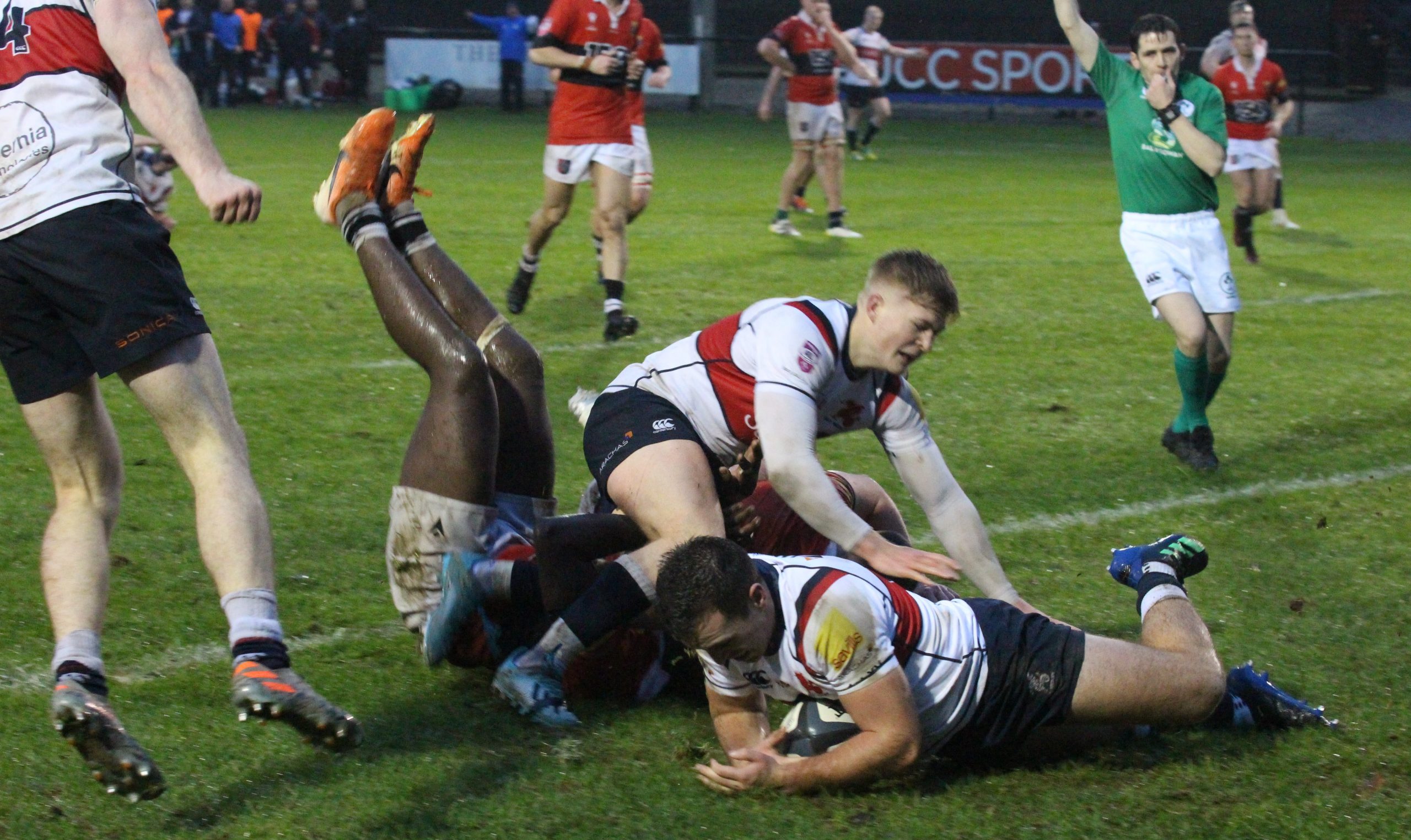 This was a very big occasion for UCC as they celebrated their 150th anniversary, however the Old Wesley players hadn’t read the script and spoiled their party on the day.

On a grey, damp day in Cork the opening salvos were equally lacklustre as both sides tried to lay down their markers.  Old Wesley were the first to find the red zone with a penalty and kick to touch inside the UCC 22.  They followed up with good carries but a knock on relieved the threat for UCC.  A similar threat by UCC shortly after was halted by a great line out steal by Wesley.

The first score of the game came on 23 minutes by Wesley, who were starting to look the more organised.  After good carries and inroads the ball made its way to Nathan Randles who negotiated a couple of tackles to score in the corner.  Ian Cassidy followed it up by nailing the difficult conversion for a 7-nil lead.

The Wesley pack was now starting to show their mettle stealing line outs and winning scrum penalties, however the advantage was not converted into scores. In fact the home side finished the half the better, applying huge pressure on the Wesley defence.  The defence held but they conceded a penalty 25 metres out in front of the posts, which Daniel Squires had no difficulty in kicking, leaving the score 7-3 to Old Wesley at half time.

It was an ideal start to the second half for Old Wesley.  After a minute and a half Alex Molloy found a gap in the UCC defence and continued on one of his classic jinking runs and avoiding tackles crossed for a try under the posts. Cassidy again converted for a 14-3 lead.  A yellow card against Reuben Pim for a late tackle after 7 minutes looked like it might dent the Wesley armour.  However the pack continued to boss the set pieces and in fact Wesley won the ensuing ten minutes 3 nil, with a short-range Cassidy penalty goal.  A well-placed kick forced the Cork side to concede a line out 8 metres from their goal line.  However it came to naught after a knock on.

Cassidy extended the lead to 20-3 with a well struck 40 metre penalty goal.  Then with 10 minutes to go Wesley were once again inside the opposition 22.  A deft chip by substitute Eoin Monahan caught UCC on the back foot.  He followed up himself and with the ball landing just on the line he gathered and grounded for a try. His own conversion attempt was foiled when the ball fell over and he was forced into a quick drop kick attempt.

The result was now a done deal however the Corkmen finished with a flourish.  From a scrum on the Wesley 22 they swung the ball wide resulting in a classic winger’s try by Johnny Murphy, converted to make it 25-10. Wesley responded and Molloy looked to be on his way to his second try only to stumble.  Then on the stroke of full time UCC struck again with an unconverted try by Sean Condon.

Some greedy Old Wesley supporters may claim disappointment in not getting the bonus point, but this was a valuable victory over an ex Division 1a side that has proved difficult for Wesley in the past.  The win leaves Old Wesley fourth in the league table, behind next week’s opposition, St. Mary’s.