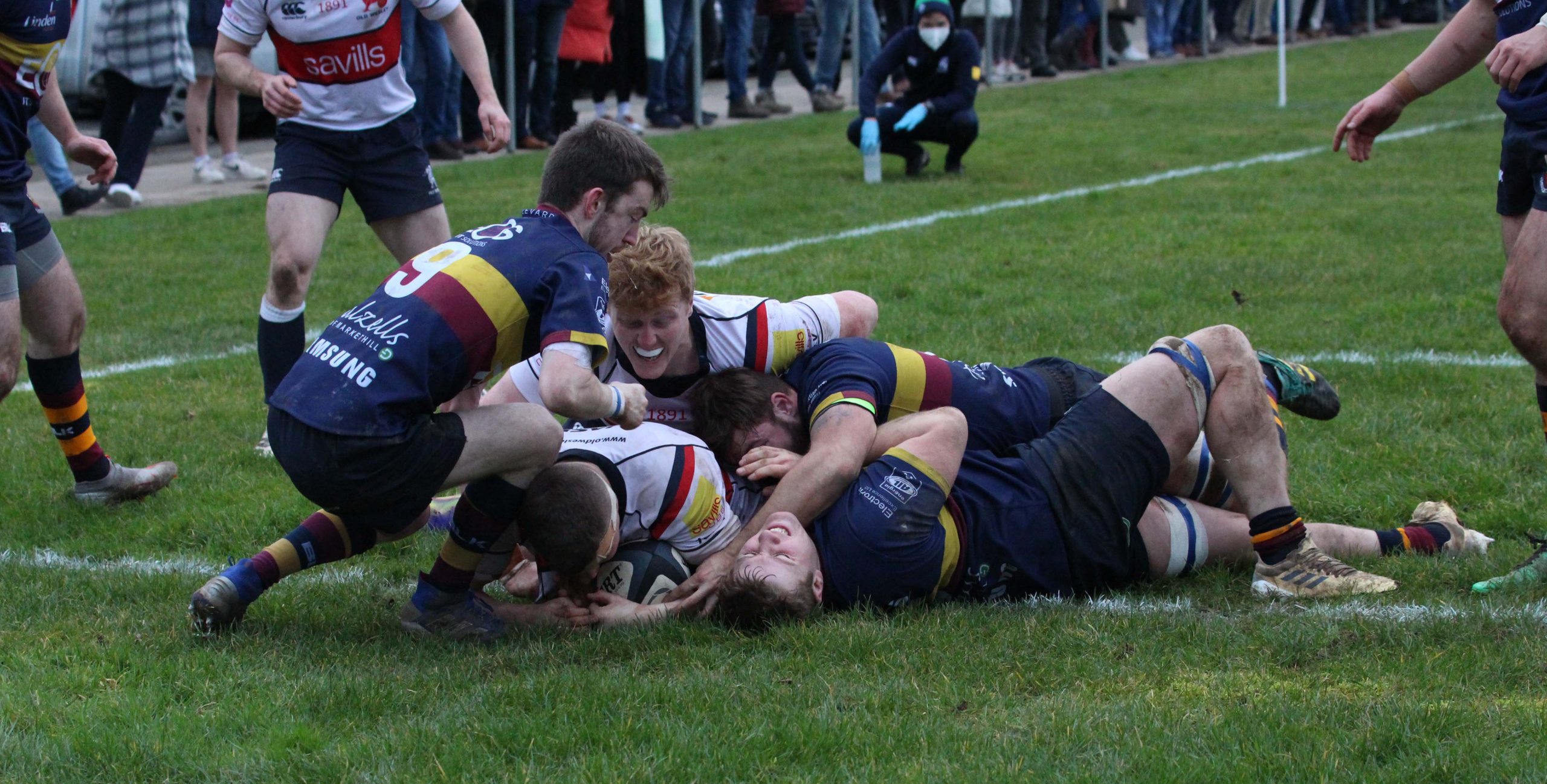 Played in pleasant and near springtime conditions, Old Wesley had the better of the opening exchanges spending much of the first 10 minutes inside the Banbridge half.   However there were to be no early scores despite having a promising 5 metre line out and an off-target penalty goal attempt by Ian Cassidy. Then with 13 minutes on the clock spectators, and indeed some of the players, were caught by surprise.  A fairly innocent Banbridge line out inside their 22 was overthrown.  Cronan Gleeson picked up the loose ball and passed to Iain McGann who had a fairly simple stroll in to score the first try of the match.  Cassidy converted.

5 minutes later it was the home sides turn when they had the Wesley pack under big pressure near their line.  With their pack in reverse gear due to a powerful Banbridge maul, Wesley were forced to revert to desperate measures. But they did so illegally and the referee awarded a penalty try, together with a yellow card for Reuben Pim.  With the numbers advantage Banbridge now looked to exploit the situation.  However their enthusiasm did not last long as Wesley upped their defence levels.  Indeed it was Wesley who benefited most from this vital 10-minute period with a Cassidy penalty goal being the only score.  Cassidy extended the lead to 6 points shortly after.

With half time approaching Tommy O’Callaghan looked like he might emulate his ‘length of the pitch’ run from last week to score another try, but a forward pass quelled the opportunity.  But Banbridge had the last say of the half with an Adam Doherty penalty kick, leaving the score 13-10 to Old Wesley a half time.

Banbridge looked like they might score early in the second half after a mis-struck clearance kick.  Wesley kept their line intact but conceded a penalty.  However Doherty missed the relatively straightforward effort.  A fine break by James O’Donovan then brought play into the Banbridge 22.  Good forward carries brought play close to the goal line and a number of forwards came very close to grounding.  The honour eventually went to Josh Pim powering over 10 metres in from touch after running a penalty.  For the first time in the match there was more than one score between the two sides.  Approaching the final 10 minutes, Doherty got it back to a one score match with a penalty and in the last 5 minutes Paddy McKenkie and Doherty exchanged penalties.  With the game in injury time a break down the right wing by Conor Gaston gave Wesley an outside hope of a late try, but it came to nothing with the opposition defence forcing the attack to run out of space.

This was a valuable win for Old Wesley. Despite their lowly league position Banbridge are no mean side and are worth more than their 9th place.