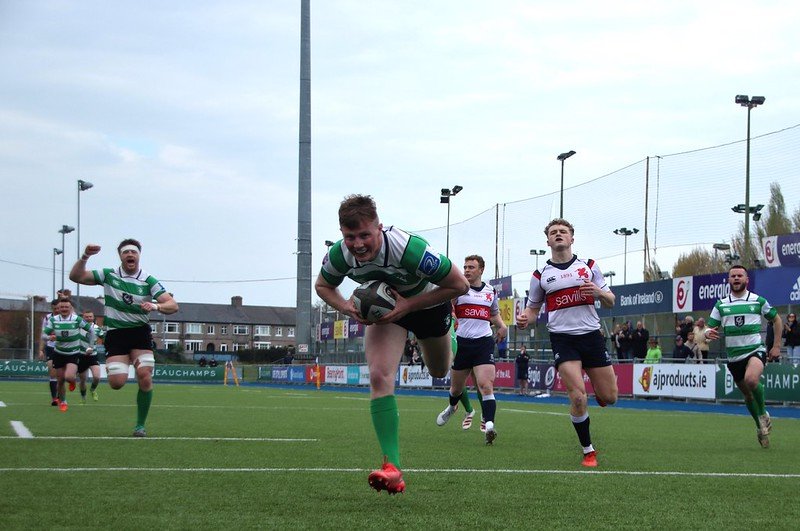 Despite their favourites tag it was the visitors, Naas, who advanced to the final in this high scoring game with an exciting finale.

Naas were first off the mark scoring a try by Gary Kavanagh after just a minute and half converted by the very reliable Peter Osborne.  Naas continued to call the shots for the early stages with Osborne adding a penalty goal to give his side a 10-nil lead. Wesley eventually got off the mark on 13 minutes with a well executed try and neat handling off a scrum 40 metres out.  Ian Cassidy and David Poff made good ground before passing to Ben Murphy who scored the try. Cassidy converted. 10 minutes later Wesley were awarded a kickable penalty goal but opted for the kick to touch.  The gamble paid off and after some good forward carries, Cronan Gleeson powered over for a second try.  Cassidy again converted to give Wesley a 14-10 lead.

Old Wesley looked to be getting into the game and a yellow card to a Naas player for a high tackle bolstered their expectations.  However, minutes later a similar offence by James O’Donovan earned him a yellow card levelling the numbers, and allowing Osborne to narrow the lead with a penalty goal.  Wesley continued to threaten the opposition defence with two good sorties, however on both occasions the visitors escaped with a penalty.  Approaching the break Rueben Pim looked to be clear for another Wesley try however play was pulled back for an infringement.  Then just on 40 minutes Osborne regained the lead for Naas with another penalty goal.  Half time Old Wesley 14 Naas 16.

Wesley started the second half with some optimism having a slight wind advantage.  However, they were dealt a huge blow when O’Donovan was shown a second yellow card, meaning red, for a deliberate knock on.  This sparked the start of a disastrous period for Old Wesley. 5 minutes later Naas extended their lead by 7 points with a converted try off a line out. Cassidy pulled 3 points back with a penalty kick but the recovery was short lived.  From a fairly innocent situation Tim Murphy found a gap in the Wesley defence to run in unopposed to score under the posts.  The Kildare side now had their tails up and looked confident continuing to hold the advantage of possession and territory.  The advantage paid off and from a scrum and with 15 minutes to go they crossed for their fourth try, by Donal Conroy, to take a 20-point lead.

Just when it looked hopeless for Old Wesley their fortunes started to turn.  From a position near the Naas line the Wesley pack started to flex their muscles and under a pile of bodies Ben Burns scored a try, converted by Paddy McKenzie. Minutes later Old Wesley scored again, this time with what must be the try of the season. A typical jinking break by the exciting Alex Molloy from his own 22 brought play over half way. The ball was taken on by Paddy McKenzie and David Poff, with the latter delivering a perfect offload to Charlie O’Regan who crossed under the post.  With McKenzie’s conversion it was suddenly a 6-point game.

With the crowd now ecstatic and roaring on their respective sides it was Wesley who were now calling the shots.  With time running out they were back up to the Naas goal line and a number of forwards came preciously close to scoring.  Naas conceded a number of penalties and another yellow card.  Then with a change of plan the ball was passed out the line to Brendan Monahan who touched down 5 metres in from touch.  With one point in it the players and spectators held their breath while McKenzie lined up the conversion.  But the difficult kick went wide allowing the visitors to breath a huge sigh of relief.

Old Wesley may feel robbed of promotion considering they won the league stages by a clear 10 points.  However, rules are rules and Wesley will have to wait until next season to renew their promotion challenge.