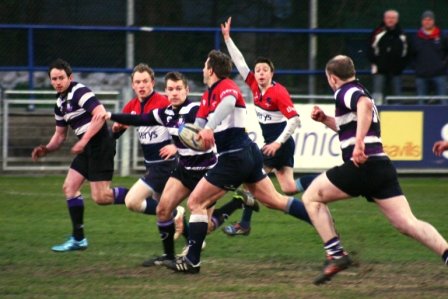 In the Moran Cup Final Old Wesley had no answer to a rampant Terenure as they succumbed to a 3-24 loss at Donnybrook. The opposition outplayed Wesley in all aspects of the game and were deserved winners on the night.

It was the worst possible start for Old Wesley as, after just three minutes and before they had even touched the ball, the opposition crossed for a try.  Despite having the wind advantage Wesley continued to struggle for most of the first quarter, and their only highlight was a missed drop goal by Brian Doherty.  Ian Masterson eventually got Wesley off the mark with penalty goal narrowing the gap to 3-5.  But a defence mix up approaching the half hour allowed Terenure in for their second try.  They extended the lead with a penalty from in front of the posts leaving the half time score 3-13.

The second half saw the opposition barrage continue but, give them their due, the Wesley defence stood firm.  However their cause was not helped by two yellow cards in the second half, which also yielded six extra points for Terenure.  The visitors’ superior power eventually told with a late third try killing off any prospect of a Wesley come back.

This Old Wesley team gave it all and will be disappointed with the result, but there was no question which was the better team on the night.