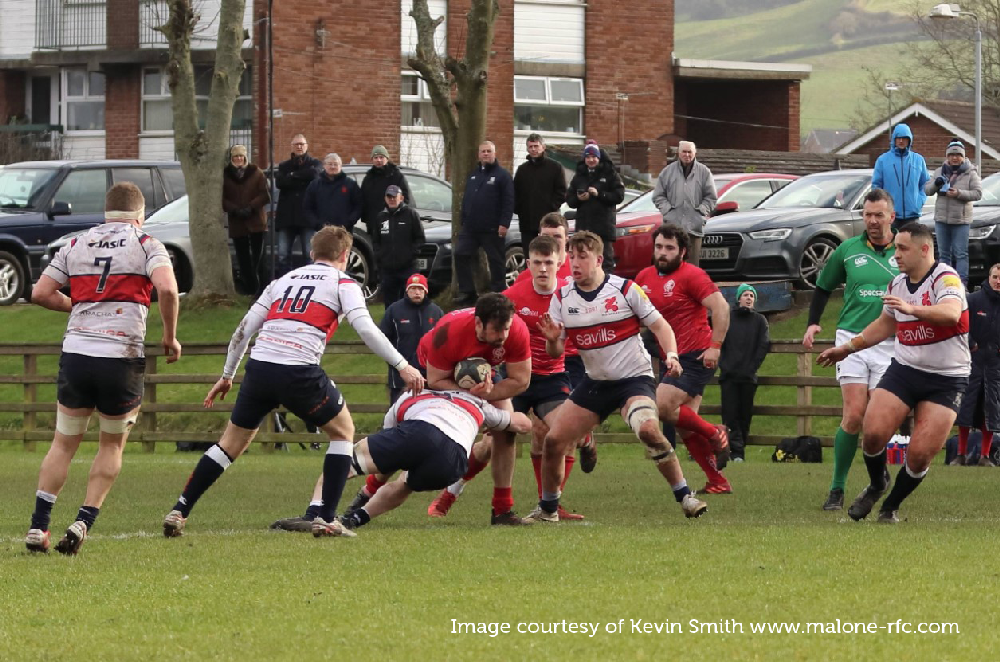 Any Old Wesley supporters watching this match would be forgiven for thinking that after 25 minutes we were heading for a big loss.  And they would certainly not have expected a bonus point win.

A game of two first half quarters, Malone opened the scoring with a long-range penalty kick aided by a significant breeze. Shortly after they were on the scoreboard again with the first try of the game; a break from just outside their own 22 was not helped by some missed Wesley tackles. The ball was passed to full back Aaron Sexton, who sprinted over untouched.  With the conversion they led 10 nil.  A Wesley penalty kicked to touch gave them a try scoring opportunity.  The try did not materialise but a second penalty in front of the posts was easily converted by Ian Cassidy for 3 points.  But Malone responded quickly with their second try, this time a training ground move off a line out, scored by Clayton Milligan. Another Malone penalty goal soon followed.  Trailing 3-18 was not in the Wesley script.

The second quarter saw a transformation by Wesley. A break by James O’Donovan gained 30 metres and further carries including one outrageous behind the back pass had them deep in Malone territory. Alex Molloy looked to be over in the corner but could not control the grounding.  Back for a penalty which was quickly tapped and after further carries Harry Noonan crossed for Old Wesley’s first try, converted by Cassidy.  Malone responded putting the Wesley defence under pressure inside their 22.  But a ball steal by JJ O’Dea ended the threat. A half break by Molloy found the home side’s defence lacking.  He passed to Reuben Pim who sprinted 25 metres for Wesley’s second try, again converted to make it a one-point score gap.  A no-arms tackle was punished with a penalty for Malone which they converted to make it 17-21 at half time.

5 minutes into the second half Wesley were awarded a penalty on the 22 in front of the posts. Somewhat surprisingly they opted to kick for touch. The gamble paid off when, from the line-out, Will Fay took a pass 15 metres out.  In typical style he ploughed his way to the line shrugging off a number of tackles for try number 3.  No conversion, but for the first time in the match Wesley led, 24-21.  But the home sided responded quickly when, after a spell of attacks, centre Stuart Moore crossed for a try.  Then another O’Donovan break had Malone on the back foot.  The ball went from side to side with Eoin Deegan getting to within a couple of metres of the line. He passed to Josh Pim who finished off the move for the bonus point try.  But the match was far from over.  Malone kicked a penalty to level the score with a grand finale in prospect.

With 12 minutes to go, and for the second week in a row, Charlie O’Regan found himself on the end of a move down the right wing to score a try for a five-point lead. Malone then had a great opportunity to score and looked to be over after some powerful forward carried.  But frustratingly for them and luckily for Old Wesley there was a knock-on allowing Wesley to lift the siege.  They continued to throw everything at Wesley holding virtually 100% of the possession well into injury time.  They eventually conceded a penalty and Old Wesley captain Iain McGann quickly tapped and kicked to touch for full time.

So, Wesley retain their 12-point lead in the league, but in the final run in of 4 games we meet 3 teams currently in the top half of the league.  Next week it’s old rivals and friends Naas.