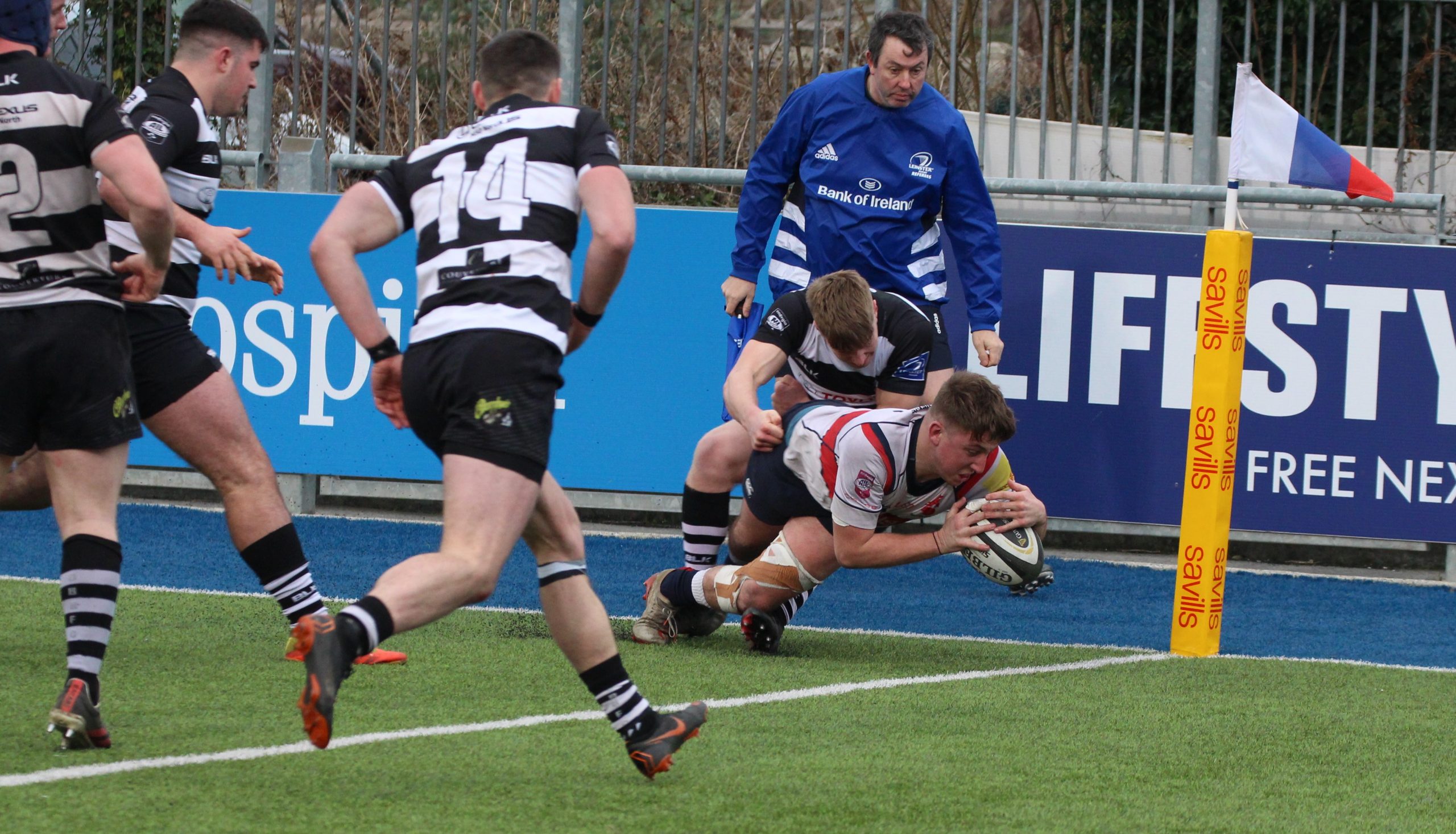 Old Wesley moved one step closer to a top four play-off position with a win over near neighbours, Old Belvedere at Energia Park, Donnybrook

For the first 10 minutes of the match both sides endeavoured to set out their stalls, with play taking place between the two 22s.  Old Wesley laid down an early marker winning a line out against the head and attempting a few attacks, however Old Belvedere, with the breeze advantage were able to clear any threats kicking the ball downfield.  Indeed it was the visitors who struck first when a missed tackle allowed speedy winger Ariel Robles a clear run to the line for a try.  Justin Leonard converted for a 7-nil lead.

Old Wesley, with a ‘this isn’t going to plan’ attitude, responded quickly and soon had the opposition on the back foot.  A late tackle by Belvedere earned them a yellow card. From the penalty, and with the extra man, Wesley opted for a scrum inside the opposition 22.  However it came to naught after a knock on.

A break by James O’Donovan opened up the defence.  The ball was taken on by Will Fay who, in a style we have seen before, brushed aside a number of would-be tacklers to take play back into the opposition 22.  With quick recycling the ball got to JJ O’Dea who proved impossible to stop as he bundled over for a try under the posts.  Ian Cassidy converted to level the sides.  Shortly after, a scrum taken against the head by Wesley led to a neat break by Eoin Deegan, but a knock on allowed Belvedere to escape.

Cassidy kicked a penalty on 35 minutes to take the lead, then Belvedere were shown a second yellow card, this time for not rolling away in the tackle.  Then just on half time Wesley received a huge boost.  A run down the wing by Tommy O’Callaghan was stopped just short of the line. And from recycled ball Wesley got their second try, scored by James O’Donovan.  Cassidy converted to give Old Wesley a healthy 17-7 lead at half time.

Belvedere started the second half with renewed gusto and had the Wesley defence working overtime.  Wesley conceded a couple of penalties and when the visitors opted for a scrum off one, a score looked to be on the cards.  However, they conceded a free from the scrum allowing Wesley to clear their lines.  It should be said the Old Wesley’s performances in the scrum and line out was an improvement on previous weeks.

13 minutes into the second half Leonard attempted a penalty but the kick at goal was missed. Then a break by O’Callaghan looked like a Wesley try was imminent, but he was stopped short of the line. From a scrum Wesley then fed out to the back line and got over the line.  The referee indicated a try but the touch judge alerted him to a knock on and the score was disallowed.  Wesley kept up the pressure, but a yellow card against JJ O’Dea looked to put a dent in their options.  Then with 10 minutes left a high tackle by Jacob Barrett had Wesley down to 13 men after a second yellow card. Belvedere will be disappointed that they were unable to capitalise on their numbers advantage; indeed it was Wesley who were better able to maintain the momentum during this period.

Then with 2 minutes left on the clock Wesley kicked a penalty to touch for a 5-metre line out.  The ball was won cleanly and mauled towards the line, where Ben Burns was able to find a gap on the blind side to score in the corner. With seconds remaining, and in an effort to have an opportunity to score a bonus point try, Paddy McKenzie took a quick drop kick for the conversion but was off target.  But from the restart play soon went dead and the referee called full time.

There is now a 3 week break in the AIL before the next match; a mouth-watering top of the table clash with Highfield.