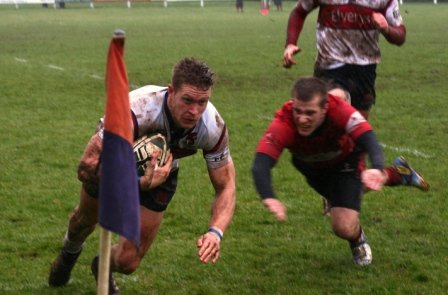 The final Ulster Bank league Div 2A match brought Old Wesley to Cork on a very miserable afternoon for entertaining rugby.  With a steady drizzle falling, Midleton got the game underway kicking into a breeze which was blowing diagonally across the pitch.  It was not a good start for Wesley as second row Johnny Carroll sustained a shoulder injury in the opening exchanges and was replaced by, club captain, Richie Morrow. The first scoring opportunity fell to Midleton when Wesley were penalised for going offside. The conversion by Paul Daly from in front of the posts gave the Cork side the early lead.

From the restart the ball was fielded by Midleton where, after a number of attempts at clearance, the ball was fed along their backline.  But a spilled ball was gathered by Wesley’s Kenny Knaggs and passed along the Wesley backline to winger Steven Harvey who was tackled into touch 15 metres out from the Midleton line. Midleton’s delayed put into the lineout resulted in Wesley being awarded a free. From the scrum Wesley opted to move the ball along their backline and were held up just short of the line. The referee brought play back however and awarded Wesley for an earlier Midleton offside infringement. The kick by the normally consistent Barry McLaughlin drifted across the posts and wide.

The slippery conditions were taking their toll on the game as the error count mounted by both teams. Most of the play was taking place between the 22’s with neither team getting the upper hand.

Wesley had a good opportunity to score just before half time when, following a scrum on the halfway, the ball was fed to Alan Large who skipped the centres to pass to the incoming wing Barry McLaughlin. In typical McLaughlin fashion he side stepped the Midleton backline, passing to Rory Stynes and on to Steven Harvey to touch down.  However, the pass to the winger was deemed to be forward and another opportunity was lost.  With the game into injury time both teams were reduced to 14 players with yellow card for the Midleton hooker and the Wesley scrum half.

Wesley got the second half underway with a carefully judged kick to their left which Midleton failed to gather and the ball came back to McLaughlin, who had replaced the sin binned Cassidy.  Moving to his right McLaughlin fed the ball to Kieran Hurrell and to Richie Jermyn who made good ground by jinking his way infield to be supported by the Wesley pack.  Wesley continued to press and a good break by Alan Large brought play to within 5 metres of the Midleton line.  From recycled play the ball was fed again back to the Wesley forwards for Craig Telford to score 10 metres in from the right hand touch line. The conversion attempt went wide.  Old Wesley 5. Midleton 3.

Old Wesley were soon on the score board again when a penalty was awarded to them for not rolling away in the tackle. A quick tap was taken by Darren Horan before passing to the ever mobile Ian McGann who raced forward to inside the Midleton 22 before being tackled. The ball came back to Mclaughlin who threw out a long ball to Richie Morrow who in turn passed to Kieran Hurrell out on the right touch line to score in the corner.  The missed conversion brought the score to Old Wesley 10. Midleton 3.

Wesley stretched their lead with two well struck penalties on 19 and 23 minutes from the boot of Barry McLaughlin to bring the score board to read Old Wesley 16. Midleton 3.

From the restart Midleton gathered the ball and drove forward into the Wesley 22 before being stopped.  Wesley had their No 8 Stephen Boyle yellow carded and this proved decisive in letting Midleton back into the game.  Midleton were awarded a 5 metre scrum and with the heavier pack and extra man pushed the Wesley pack over their line to score a try by Aidan McCarthy. Colan-O’Leary’s conversion brought the score to Old Wesley 16. Midleton 10.

The Corkmen, with their pack dominating more of the play up front and using the wind to their advantage, launched a kick from their 22 where the ball was deemed to be knocked on.  From the resulting scrum the ball went out the Midleton line where they had an extra man to break through to score a converted try near the posts to give them a one point lead.  Old Wesley 16. Midleton 17.

With the game running into its final minutes Wesley conceded a penalty and the resulting kick brought play into the Wesley 22. From the line out Midleton gained possession and rumbled the ball to the Wesley line before spreading the ball wide to out play the sparse Wesley backline to score their third converted try.