The annual golf match between Wanderers FC and Old Wesley RFC was played on Sunday 8th November at Rathfarnham Golf Club.  Eight fourballs set out to play what was an agreed reduced match over 10 holes due to the inclement weather.  Eddie Fogarty (the official score keeper) deemed the result a draw – which was a most suitable result in view of the weather conditions.

It was great to welcome George Benn, Stan Browning and Dick Shiel, some of the players from the original fixtures, who attended the dinner to mark the 50th anniversary. The meal was excellent, with all who attended enjoying the great camaraderie and banter that exists between our two clubs.  In addition €300 was raised for the IRFU Charitable Trust.

The competition was first played to settle a ‘dispute’ between two stalwart clubmen, Arthur Bennett of Old Wesley and Bob Graves of Wanderers and has taken place as a social event virtually every year since. 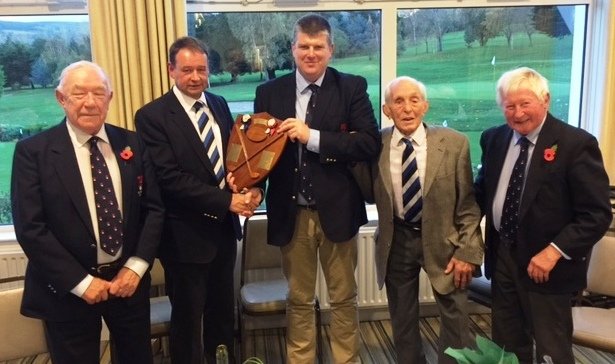